Home » Why Is Veganism Growing in Popularity among Boomers?
Privacy Policy This post may contain affiliate links for products I recommend. If you purchase, I may earn a small commission at no cost to you.

While it is true that the majority of people become vegans between the age of 16 and 64, around 2% of vegans in the US are aged 55 or over. In America, around 4% make the switch from an omnivore lifestyle for spiritual reasons, 19% for dietary reasons, and 77% for ethical reasons. If you are thinking of going vegan, rest assured, you are not alone. The movement is enjoying a big boom of late, as the world struggles against pollution caused by the meat industry and human beings become increasingly concerned about animal welfare and the plethora of medications consumed by livestock. 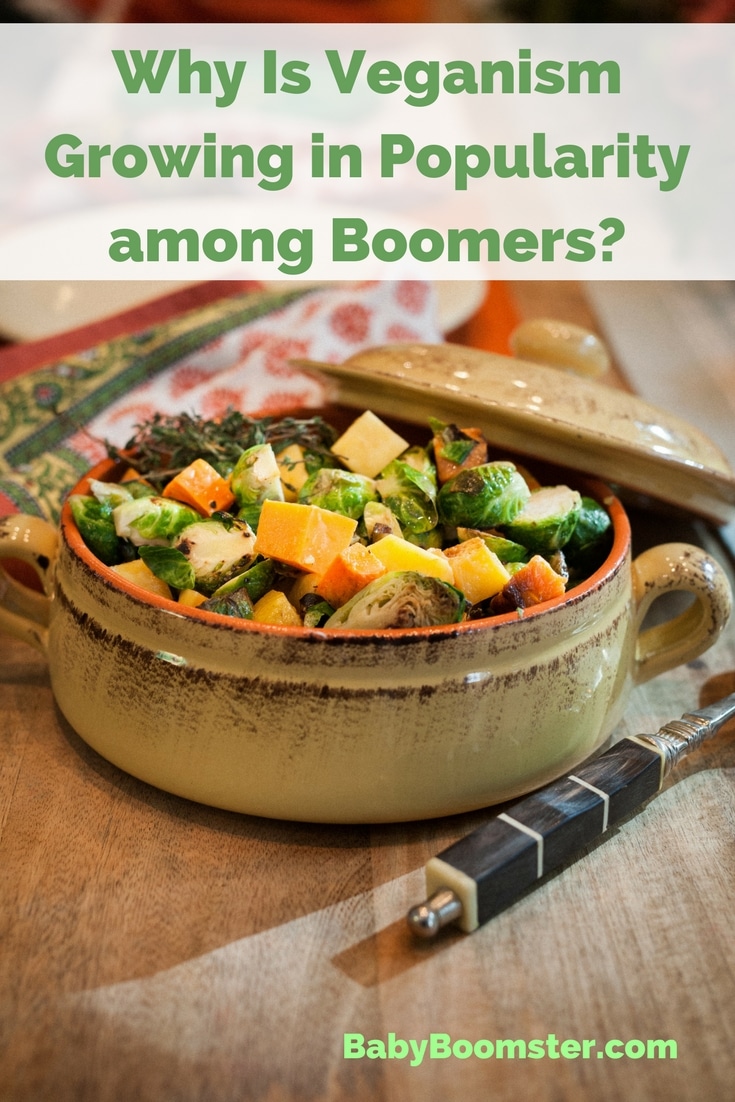 Photo by Joseph Gonzalez on Unsplash

No Longer a Hippie Pursuit

In a fascinating article in Forbes, journalist Katrina Fox notes that far from being “relegated to the fringes of society where for so long it was mocked for being ‘weird’ or ‘extreme’, veganism is going mainstream.” Her article argues that entrepreneurs should consider ‘veganizing’ their business because plant-based food sales skyrocketed to around $3.1 billion and plant-based dairy foods are already making up 40% of all dairy and dairy alternative sales.

Upping the Attraction of Veganism

Veganism is not only more interesting from the ethical and sustainability perspectives; there are a wide array of non-meat substitutions which are making it easier to go vegetarian or vegan without missing one’s favorite foods. Veganism imposes more restrictions than vegetarianism since eggs or dairy are a no-no, but there are alternatives to these foods that make it easy to forget the difference. Impossible Foods, for instance, is one company that reduces animal products a molecular level, looking for similar atomic combinations in plants to develop products that have a similar texture and flavor. Take the Impossible Burger, which ‘bleeds’ like a real burger. Despite its authentic taste, the site notes that the product “uses 95% less land, 74% less water, and creates 87% less greenhouse gas emissions” than beef varieties.

Losing or Maintaining Weight with Veganism

An important study carried out by scientists at the University of Southern California tested a number of different weight-loss diets on different groups of participants: vegans, vegetarians, pesco-vegetarians, semi-vegetarians, and omnivores. After two and six months, they found that the vegan group lost the most weight. The lead author of the study noted that veganism isn’t for everyone; it requires sound planning and can be especially difficult to stick to in the first weeks without meat. However, if you are after a healthy weight to shed excess weight, it is an interesting regime to look into.

There is more to veganism than meets the eye; studies have shown that this lifestyle has important health benefits. For instance, those who consume plant-based foods have a significantly lower risk of dying from heart disease and stroke. Veganism helps battle inflammation, which is vital when it comes to keeping heart disease and cancer at bay.

If you are interested in the vegan lifestyle, why not try easing into it slowly? You might hop on the ‘Meatless Mondays’ bandwagon, or try to reduce your meat consumption, before deciding to go ‘the whole nine yards’. No two roads to veganism are the same, and as is the case with all major decisions in life, it is vital for you to find your own path.

You may also enjoy: The Pros and Cons of Considering Vegetarianism Over 50

Have you gone meatless or have been thinking about it? Please leave a comment below.

Jennifer Dawson is an experienced freelance writer who specializes in food and nutrition. Working in fitness marketing previously gave her a good feel for the industry and since going freelance she has been able to explore her preferred topic areas such as diet, nutrition and food. Outside of work, Jen enjoys traveling, swimming and spending time with her young family.