Home » Partying with Norman Lloyd: Oldest Living Working Actor
Privacy Policy This post may contain affiliate links for products I recommend. If you purchase, I may earn a small commission at no cost to you.

For several years, I’ve been attending a 4th of July gathering in Beachwood Canyon, under the Hollywood sign. We sit down at tables in a red-white-and-blue backyard eat BBQ and drink Sangria. The first we were there, an elderly man sat next to me regaling the other guests with stories of old Hollywood. He looked familiar but I couldn’t quite place him at first. Suddenly, I realized he was actor Norman Lloyd, and, at the time (2016), he was 101 years old.

According to him, he was officially 101 ½. You may recall Norman Lloyd from the TV show St. Elsewhere where he played Dr. Daniel Auschlander. Coincidentally, St. Elsewhere was the show that earned me my SAG card when I did a quick and forgettable scene with Ed Bagley Jr. and Howie Mandel. Norman had also appeared in a long list of feature films that include Saboteur, Spellbound, and Limelight. His latest project, which he completed at the young age of 99, was Trainwreck with Amy Schumer.

Norman told us he lived next door to Ed O’Neil (star of Modern Family) who invited him to have lunch with director Judd Apatow. After they finished eating, Apatow asked if he could walk him to his car. Norman, born in 1914, still had his driver’s license up until 2014 when his son insisted he give it up. He believes that Apatow walked him 1 ½ blocks to his car to see if he could actually walk that far. Right after that, he cast Norman in Trainwreck as the old man in a wheelchair. Norman says he adored Amy Schumer who would say anything “unedited” no matter who she was talking with.

Norman had been close friends with Alfred Hitchcock, Charlie Chaplin, Jean Renoir, and an acquaintance of Bertolt Brecht. He quipped about the time he was working with Hitchcock on a film with Kim Novak. Hitchcock had the sniffles and Norman asked him if he was coming down with a cold.  Hitch replied, “The cold in my nose is a certain actress.” It’s well-known that Hitchcock and Novak didn’t get along.

He and his wife, Peggy Craven were married for 75 years until her death at the age of 98 in 2011. It was one of the longest marriages ever recorded in Hollywood. He still retains a housekeeper that he says he pays a fortune to (more than most) because she was a favorite of his wife. The woman had the gall to ask for a raise and he had to say no.

In the 1930s, Norman worked with the Group Theatre, the Theatre of Action, and the Federal Theatre Project. which he says was “one of the great theaters of all time.” He, Orson Welles, and John Houseman left the Federal to form the Mercury Theatre where he played leading roles for years. He mentioned that although he believed Orson Welles was one of our “greatest talents” he was not a pleasant person to work with. In fact, he was a tyrant.

In the early ’40s, he hooked up with Hitchcock and went on to have a long friendship and working relationship. Not only did he appear in several of his films but also went on to act, direct and produce numerous episodes of Alfred Hitchcock Presents. You can view his credits on his IMDB page.

Norman was particularly enamored with Charlie Chaplin, whom he considered to be a genius. He talked about the time Chaplin married his fourth wife Oona O’Neil. She was 18 at the time and he was in his 50’s. Oona was the daughter of playwright Eugene O’Neil. Norman said that although it seems hard to believe, they were deeply in love.

He was an avid tennis player and played twice a week up until 2015 when he suffered a fall. In his younger days, he often played with Chaplin, Joseph Cotton, and Spencer Tracy.

When I asked him what his secret of longevity was he said bluntly, “Luck.”

At the party, the discussion turned to the idea of retirement. Norman Lloyd hasn’t and does not have any desire to retire anytime soon. He was the oldest living “working” actor as of the date of this writing. Another man at the party who worked for a box making company told Norman he hadn’t retired yet because otherwise, all he’d do is sleep. Norman agreed.

I sat transfixed for hours listening to him speak with his articulate stage-trained voice like a fly on the wall. He was so mentally alert with crystal-clear memories and was in such good shape, he could have easily been a 70-year-old rather than a centenarian. There were also very few wrinkles on his face.

A friend who writes a vegan blog asked me (hopefully) if he was vegan. I told her “no.” He sat at the table chewing on a large piece of BBQ chicken, corn on the cob with butter as he sipped a Sangria. The only thing he passed on was dessert.

How many centenarians do you know who can eat corn on the cob without it being cut off and mashed?

I’m hoping to look and feel as young as centenarian actress Olivia de Havilland was if I’m lucky to live that long.

For more about Norman Lloyd, you may enjoy his book Stages of Life in Theatre, Film, and Television – click here to view 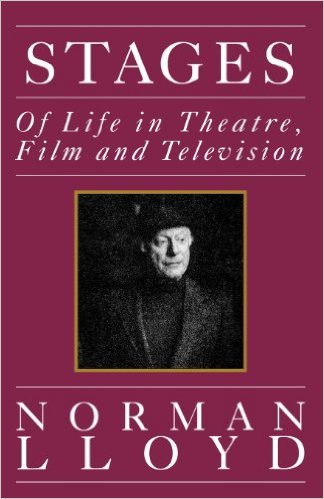 July 5, 2018 – Norman showed up at the annual 4th of July party again after missing the previous year to attend a Dodger game!  He was then 103 and still telling stories and looking as good as ever!

In 2020 our party was canceled due to COVID, Norman was 105 and still going strong.

2021 – Norman is 106, still with us, and going for the record as the oldest living working actor.

Do you think Norman Lloyd’s secret to longevity is just “luck?”  Please leave a comment below.