Home » Nashville, Tennessee: The Mecca of Honky Tonk in Photos
Privacy Policy This post may contain affiliate links for products I recommend. If you purchase, I may earn a small commission at no cost to you.

I flew into Nashville, Tennessee to attend a blogger conference, which is always a great excuse to visit a fine city and meet some of my online friends. It was the second time I’d been there and both times were for a conference held at the same hotel.

Navigating our vast hotel under a dome

If you’re going hold a conference in Nashville, the best place to have it is at the Gaylord Opryland Resort which is almost like staying at Disneyland. It’s an amazing maze of buildings, restaurants, stores, riverwalk, and conference center, all under a huge glass dome. It’s almost like a city within a city and, believe me,  it’s easy to get lost. It also doesn’t matter what the weather is like because it’s always the same temperature under the dome. The only problem is that the air circulation system tends to dry out your skin, so bring plenty of moisturizers.

Conferences always leave you with little time to explore before you have to go home but me and my new found friend Dee, took a taxi downtown to see what we could before our planes took off that afternoon. Nashville had been in the midst of a snowstorm the day I arrived but the day we left it was sunny and warm.

We had brunch at The Rock Bottom Brewery and both of us decided to try shrimp and grits. Being from California I’d never had grits before and even though I was told grits were gritty, my meal was delightful.  Creamed grits are the best and that’s what they served.

We strolled down Main Street of the Music City to see some of the sights and I took a bunch of pictures. You can’t say Nashville isn’t colorful. There were all sorts of fun characters hawking their wares, and playing music on the street,  as well as honky-tonks, yummy places to eat and a bunch of stores selling cowboy boots.

We had to go into the famous Goo Goo shop to get a Goo Goo Cluster. It’s been a Nashville staple since 1912 and contains real milk chocolate, caramel, peanuts, and marshmallow nougat. If you have a sweet tooth, you’ll enjoy it. I don’t even want to know how many calories are in those buggers. 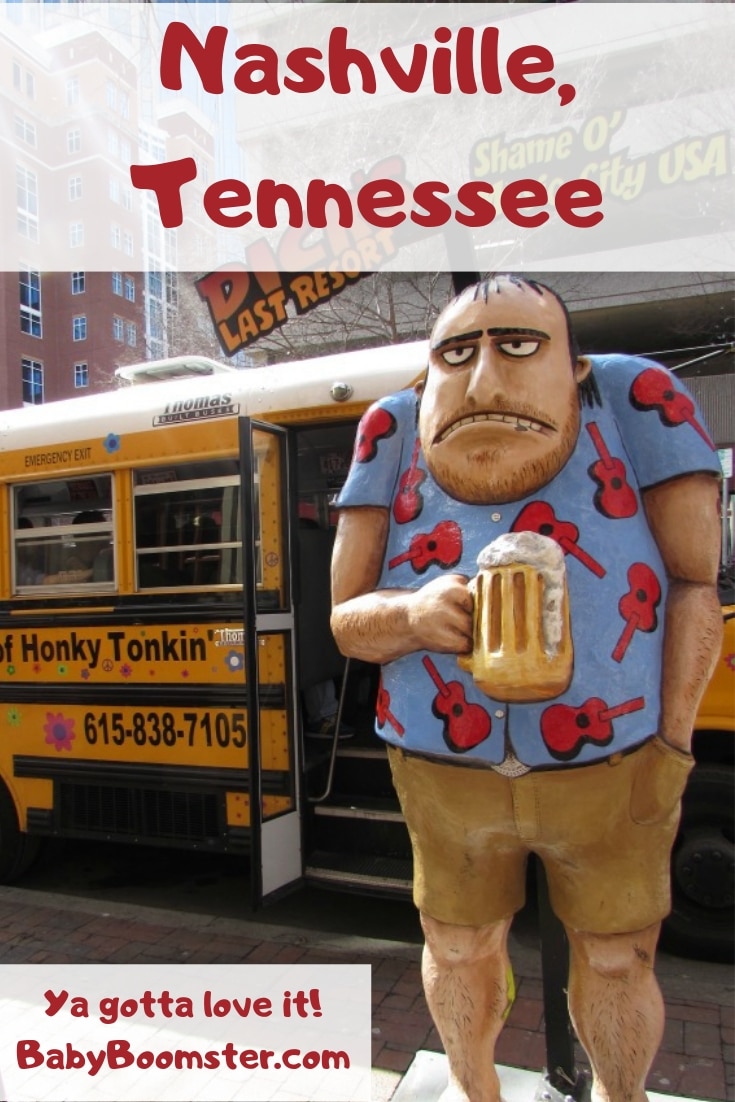 Have fun browsing my images below.

To view my photos of Nashville in full size, click on the images below. Please feel free to pin them on Pinterest and follow my boards here:

Just before we left we grabbed a cab and were fortunate enlist an enthusiastic driver who took us to Two Rivers Mansion and let us get out to take some snaps. It was built in 1859 (before the Civil War) and is a prime example of antebellum architecture.

If you’re heading to Nashville and want an awesome taxi driver, call this guy. Hopefully, he’s still on the job.

He’s incredible. I wish we’d found him before we hit downtown. Next time I’m staying longer.

Have you found your midlife girlfriends tribe yet?  Who are they and what do you do together? Like-minded women together are unstoppable.