Home » Italian Inspired Radicchio and Arugula Salad
Privacy Policy This post may contain affiliate links for products I recommend. If you purchase, I may earn a small commission at no cost to you.

The Radicchio and Arugula Salad featured at the bottom of this post was inspired by my trip to Italy. 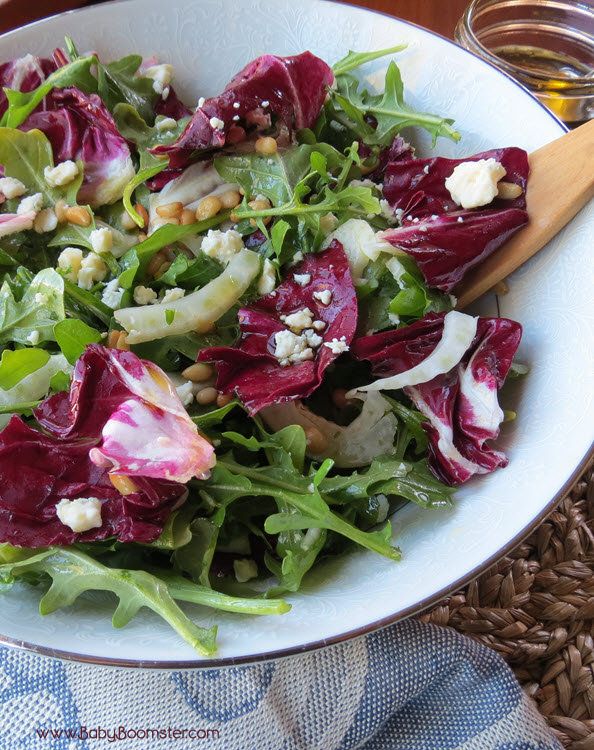 This radicchio and arugula salad is attractive, cleansing, high in anti-aging nutrition and tasty. I hope you’ll give it a try.

Print
An Italian inspired salad high in anti-oxidants and nutrition.
Author: Rebecca Forstadt Olkowski
Recipe type: Salad
Cuisine: Italian
Ingredients
Dressing
Instructions
Dressing
Notes
In addition to radicchio and arugula, you can throw in fresh sprouts to add additional micronutrients and anti-oxidants.
Nutrition Information
Serving size: 2-4
3.5.3226
Salad isn’t served before a meal in Italy, but rather after the meal as a digestive. You won’t find it soaked in dressing either. If you want dressing, you can sprinkle a little extra-virgin olive oil, vinegar, and salt on it but there’s not really such a thing as “Italian dressing.”  We found some gorgeous salad greens at the Market we visited in the image below. 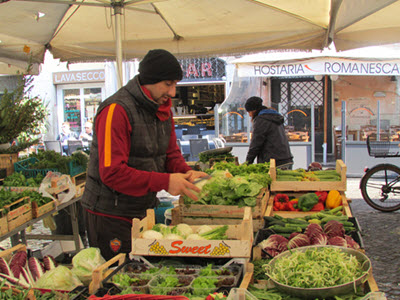 Italians eat seasonal fruits and vegetables, but due to their temperate climate, many items such as ripe tomatoes, eggplant, and zucchini were still available even in November and December. The weather is somewhat similar to Southern California, where I live, except that Italy is a little cooler and has more rain. We were very comfortable while we were there.

Fresh salad leaves, other than Iceberg lettuce may be difficult to find if you live in certain parts of the country but many stores import bagged greens from California, Chile and other warm parts of the world at your neighborhood store.

I used radicchio and arugula in this salad. Both are popular in Italy and it’s often baked or sautéed. Radicchio has a sharp flavor and arugula is slightly peppery.

Arugula, also known as Rocket, is heart healthy because it raises your level of nitric oxide. It’s also rich in chlorophyll and will help prevent liver and DNA damage caused by toxins in your body. It’s better to eat it raw rather than cooked, for this reason, because more chlorophyll is retained. It’s a cleansing salad green that will keep your colon happy and healthy.

Radicchio is a member of the chicory family and contains a high level of plant compounds high in anti-oxidants. An ancient Roman philosopher, Pliny the Elder praised radicchio for its medicinal properties. He claimed it was a blood purifier and a natural sedative for people with insomnia. One cup of radicchio will give you 100% of your vitamin K needs, support bone health and resistance to insulin.

What’s your favorite way to eat radicchio?  Please leave a comment below: