Home » Electrodermal Screening: See What’s Up With Your Body
Privacy Policy This post may contain affiliate links for products I recommend. If you purchase, I may earn a small commission at no cost to you.

A while back, I wrote a post about how to prevent a heart attack. It was based on the recommendations of Dr. Cathie Lippman, a holistic doctor in Beverly Hills, who spoke at a networking event I attended. She invited me to come to her office to chat and offered to do an electrodermal screening to show me how it works. It’s a galvanic skin response device (think EEG or EKG) that gives clues to what may be happening in your body. 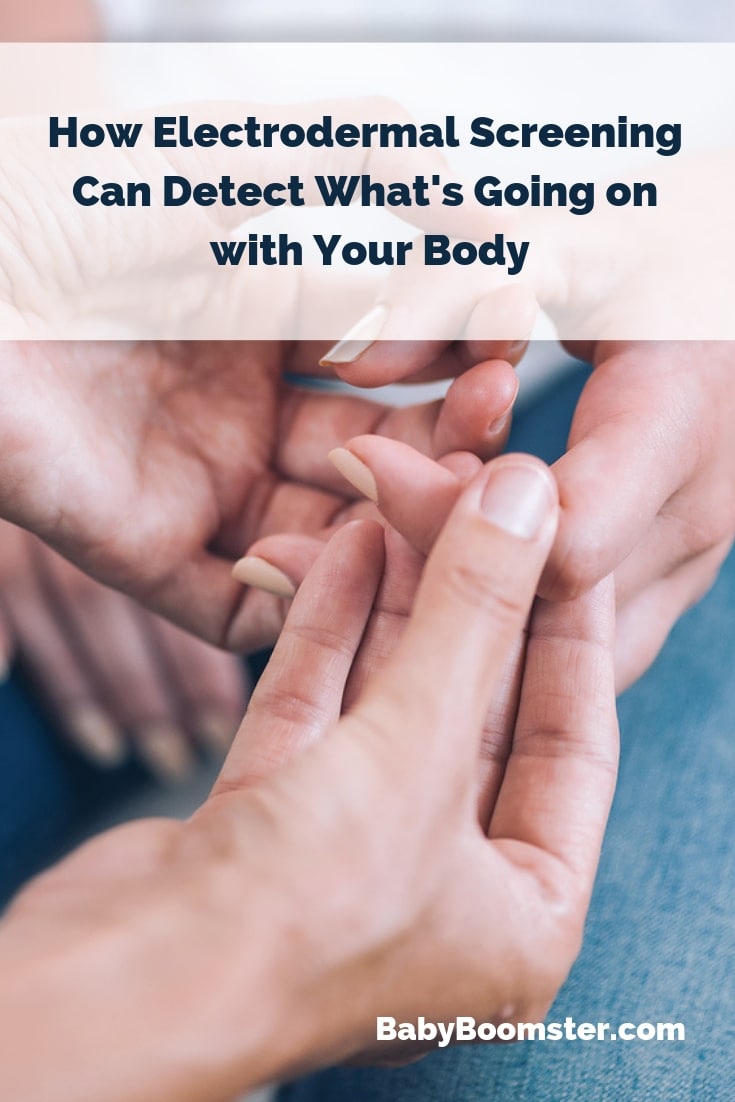 The device that Dr. Lippman uses was originally created by Dr. Reinhard Voll. He was a traditional medical doctor who also specialized in Chinese medicine and homeopathy. Before he passed away, he created a 3-volume series about electroacupuncture and how it works.

Dr. Voll was diagnosed with bladder cancer as a young man and was given six months to live. Dr. Lippman said she heard him tell the story sixty years later. The work that he did has been computerized and incorporated into the BioScan electrodermal screening scanner. Dr. Lippman first started working with it in the late 80s and now uses its fourth iteration.

The first thing Dr. Lippman did was to make sure that I was able to be tested.  She had me make an “O” with my fingers and tested various areas of my body using a muscle testing technique. She could tell that I was adequately hydrated and had the ability to respond to change. My liver, gallbladder, skin, and nervous system also appeared to be in balance.

There appeared to be an issue with my Matrix, which is part of the body’s connective tissue and where major communication occurs. It’s a gelatinous substance that allows mineral salts like calcium to be stored and transported. Apparently, it needs attention and may be a contributing factor to my having difficulty losing weight.

I told her before we started the electrodermal screening that I was on day four of a nine-day detox program. She’s a fan of detoxes and said she would take that into account.

I held a metal stylus in my left hand while she used another stylus to touch acupuncture points in my moistened right palm. Both styluses were connected to her computer and as she touched each point, a gentle frequency (that you can’t feel) was emitted that recorded the reading. The energetic characteristics of the skin reflect the health or condition of each organ or body system being scanned.

Each time she tested a particular health concern, I could see the response on her computer screen. When the indicator goes into the green zone, it means that concern is balanced. If it goes above the green area, there’s a reason for concern. If it falls below the green zone it could mean something is seriously wrong.  Dr. Lippman used the meridian system and told me I was able to be tested.

Most of the areas she tested on me fell into the green zone meaning I was balanced and healthy. I was excited to hear that!

Dr. Lippman tested her son when he was young and had a sore throat. The indicator suggested strep throat, so she gave him a homeopathic and he felt better. His pediatrician also tested him and told her it wasn’t strep but another bacterial issue and the homeopathic fixed it.

Disclaimer: Electrodermal screening devices are not officially diagnostic but give the doctor clues of where to look for problems.

What I need to work on

The scan showed that I have a fatty acid deficiency. That means I need to add more essential fat to my diet like flax or fish oil. I eat olive oil and avocado all the time, but flax and fish oil are richer in fatty acids.

I was also low in minerals so she suggested I take a mineral supplement. She gave me a bottle of Multi-Mins to take home that doesn’t contain iron or copper.  Mineral deficiency is a common problem for most people because we don’t get enough in our food. She also pointed out that women over 50 shouldn’t take iron supplements unless they’re severely anemic. Post-menopausal women don’t need extra iron and it can cause health problems.

Both mineral supplements and essential fatty acids help clear environmental toxins from our bodies. They’re especially helpful if you live in a big city like I do in Los Angeles.

Other sensitivities she found were pesticides, herbicides, chemicals, and a combination of spores called Rinkle mold mix.

It surprised me that I didn’t test high for radiation because I spend hours in front of a computer and recently had a CT scan and a Mammogram.

My food sensitivities turned out to be wheat, soy, bananas, and peanuts. None were severe but it’s best that I avoid them. Bananas often come from South America and are treated with fungicides so that may be why they came up. My gluten intolerance was at a 2 which isn’t the worst but isn’t the best. Wheat was the culprit but I was fine with other grains.

You may want to try it too

Dr. Lippman’s BioScan electrodermal scanner is FDA registered but as I mentioned its purpose is to simply indicate what may be going on in a person’s body. It gives the practitioner a basis to follow up with blood tests or other means to determine a precise diagnosis.

If you’d like to know more about Dr. Cathie Lippman’s practice and other modalities she uses, you can visit her website.

Contact her directly to receive her booklet, “Your Guide to Staying Healthy in a Challenging World.” It contains tips that include health issues such as heavy metal toxicity, allergies, what to put in your medicine chest, prep for surgery, reducing your flu risk and much more.

For those who are located in the Los Angeles area, call and make an appointment to have your own electrodermal screening at her office in Beverly Hills.

Have you ever had an electrodermal screening? Would you like to give one a try? Please leave a comment below.