Home » Sicilian-Style Eggplant Caponata
Privacy Policy This post may contain affiliate links for products I recommend. If you purchase, I may earn a small commission at no cost to you.

The Sicilian-style eggplant caponata recipe featured below makes a delightful and colorful appetizer or side dish and is low in fat.  It’s delicious served over crostini (toasted rustic bread) crackers or by itself. 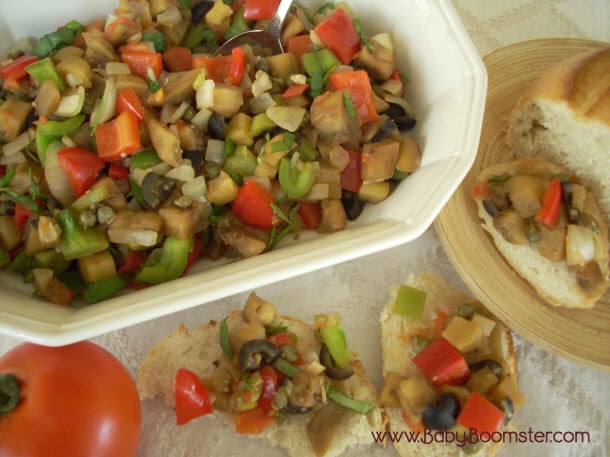 Print
A colorful and nutritious appetizer that you can spread on crusty bread.
Author: Rebecca Forstadt Olkowski
Recipe type: Side dish
Ingredients
Instructions
3.5.3208

The history of this delicious appetizer

Eggplant caponata was originally created by the Moors in Spain during the Middle Ages but is also known as a classic Sicilian dish. Eggplant, known in Europe as aubergine, adds sweetness. Along with olives, capers, and other vegetables, it makes a colorful and flavorful dish.

The history of this delicious and nutritious dish goes back to 1709 and has been a popular appetizer ever since. It’s best served with crusty or toasted bread. There is no “one way” of making Caponata in Sicily and each family has its own version of the recipe. You can either serve it chilled or at room temperature. Pair it with grilled meat or fish.

What’s your favorite way to eat eggplant?  Please leave a comment below.

This website uses cookies to improve your experience while you navigate through the website. Out of these, the cookies that are categorized as necessary are stored on your browser as they are essential for the working of basic functionalities of the website. We also use third-party cookies that help us analyze and understand how you use this website. These cookies will be stored in your browser only with your consent. You also have the option to opt-out of these cookies. But opting out of some of these cookies may affect your browsing experience.
Necessary Always Enabled
Necessary cookies are absolutely essential for the website to function properly. These cookies ensure basic functionalities and security features of the website, anonymously.
Functional
Functional cookies help to perform certain functionalities like sharing the content of the website on social media platforms, collect feedbacks, and other third-party features.
Performance
Performance cookies are used to understand and analyze the key performance indexes of the website which helps in delivering a better user experience for the visitors.
Analytics
Analytical cookies are used to understand how visitors interact with the website. These cookies help provide information on metrics the number of visitors, bounce rate, traffic source, etc.
Advertisement
Advertisement cookies are used to provide visitors with relevant ads and marketing campaigns. These cookies track visitors across websites and collect information to provide customized ads.
Others
Other uncategorized cookies are those that are being analyzed and have not been classified into a category as yet.
SAVE & ACCEPT
4 shares