Home » Pomp & Whimsy: A Historical Look Back to Cocktails for Women
Privacy Policy This post may contain affiliate links for products I recommend. If you purchase, I may earn a small commission at no cost to you.

As March is Women’s History Month there have been numerous events to attend in Los Angeles. I listened to a panel of women entrepreneurs to learn more about business.  But I also attended a tasting and panel discussion that delved into The History of Women and the Cocktail. It was presented by Pomp & Whimsy, a boutique distiller of gin liqueur, and the Museum of the American Cocktail. (MOTAC) in association with the #kindredspiritssociety (an invite-only organization) Cocktails for women are unique so I was excited to see what it was all about. 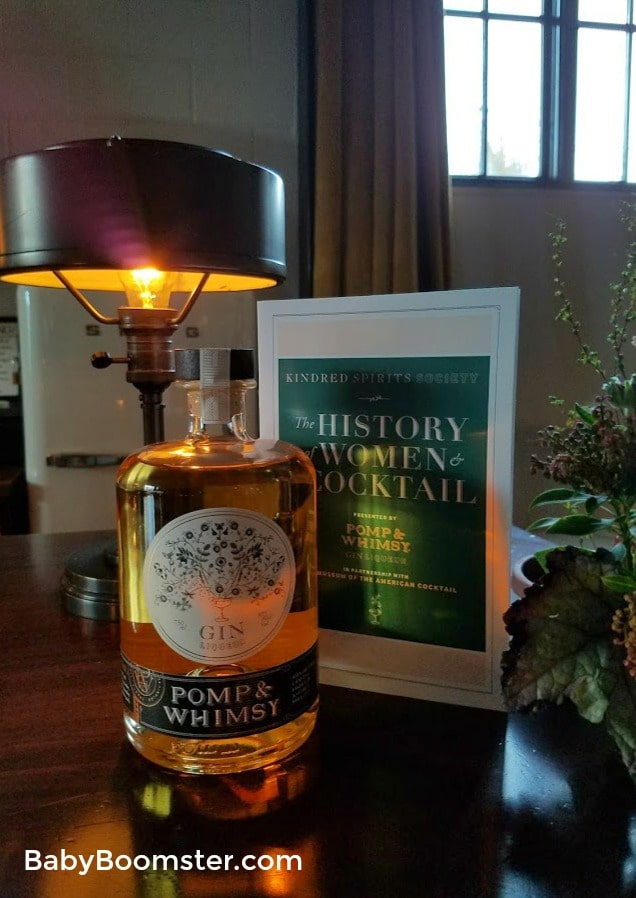 The event took place at The Palihouse, a very cool boutique hotel in West Hollywood. Our moderator was Dr. Nicole Nice, CEO of Pomp & Whimsy, who is also a female entrepreneur. She is a trained sociologist and brand strategist-turned spirits director. Panelists included Marissa A. Ross, a wine blogger at Wine all the Time, who also writes for Bon Appetit and is the author of Wine. All the Time: The Casual guide to Confident Drinking – Mia Mastroianni, bartender for SOHO House and expert mixologist for the TV show Bar Rescue – and Liz Williams, founder, and CEO of the National Food and Beverage Foundation.

The Museum of the American Cocktail opened a new Los Angeles chapter in San Pedro. They put on drink-oriented events in both LA and New Orleans.

Cocktails for Women during the Victorian Era

When you think about hard liquor, it’s usually associated with men.  Throughout history, men were the ones who invented, wrote about, and consumed drinks.  If you go back to the Victorian Age, drinking establishments were a man’s domain. Bars, saloons, pubs, and private clubs were where men went to relax and socialize, Women were excluded except for those who had tawdry reputations.

During that time, men wrote bartending and drink-mixing guides.  Jerry Thomas, known as the Godfather of cocktails, published The Bartender’s Guide in 1862.  He started a movement of mixology that spread across the U.S. and Europe, inspiring professional bartenders to publish their own manuals.

They weren’t the only ones. Women were also prolific writers about drinking but the genres they wrote for were different.  Women may have been excluded from bars but were home entertaining their friends with ladies’ luncheons, afternoon teas, high-society bashes, weddings, baby showers, knitting clusters, and lawn tennis affairs. They didn’t just drink lemonade and there were plenty of cocktails for women being consumed.

Women in the 19th and early 20th century mixed their cocktails using beverage manuals other women wrote. There were numerous books written by women that contained household management tips for how to feed your baby, how to launder clothes, and how to entertain.  In addition to recipes, they included instructions on how to serve, what to serve, when and in what order. Chapters were dedicated to how to mix beverages for punches, cups, cobblers, and juleps. They would also share recipes for distilling.

As home distillers, women created tonics to treat common ailments. They fermented fruit wine, made beer, and created boozy desserts. Eliza Acton was a popular British writer who published a book in 1845 called Modern Cookery for Private Families. It had 9 editions in the U.S., was extremely popular with women during that period, and was cited in numerous publications.  Eliza’s father was in the wine and beer trade and gave her the knowledge to write eloquently about cocktails for women. Her book was published 20 years before Jerry Thomas’s.

We had the privilege of tasting vintage-inspired cocktails created by four of LA’s finest female bartenders. They welcomed us with Champagne mixed with Pomp & Whimsy’s Gin Liqueur. It’s made with 16 natural ingredients including juniper, coriander, angelica, grapefruit, bitter orange, cucumber, lychee, raspberry, lavender, and jasmine pearls. The liqueur is a “cordial,” which was popular during the Victorian Age. Most of the gin we drink today is dry but Pomp & Whimsy’s liqueur is sweet and aromatic.

Before the panel started, I tried my first cocktail made with Pomp & Whimsey called “Swill and Sway.”It was created by Sarah LM Mengoni, a Los Angeles bar manager at Double Take LA and co-founder of Spirit Animal Beverage. The cocktail is also mixed with fresh lemon juice, sage honey, San Pellegrino Blood Orange and garnished with charred lemon. To say it was delightful would be an understatement. After the first two drinks, I thought I’d been slipped a roofie. They were potent but so lovely it was hard to stop drinking. LOL. 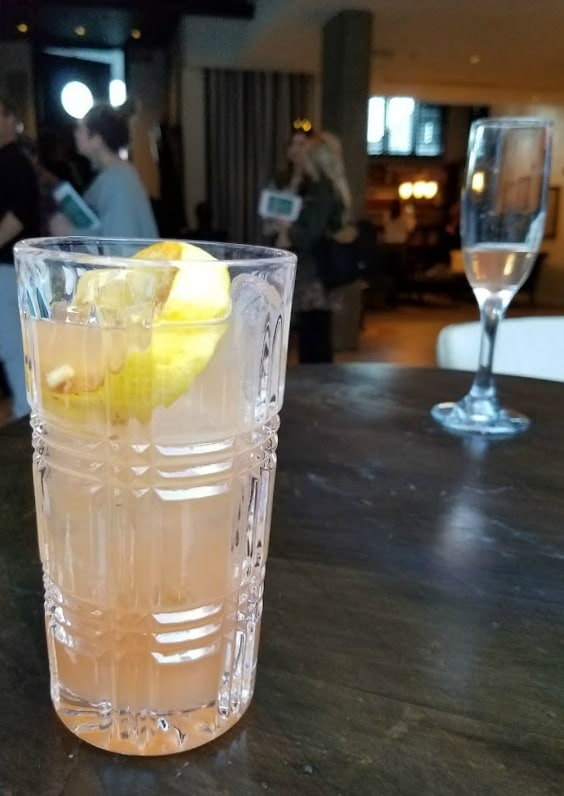 After the panel was over we were invited to try all the cocktails. Each one was inspired by a vintage recipe created by a woman. Swill and Sway was a variation of the “mild cocktail” from Alma Whitaker’s Bacchus Behave! The lost art of polite drinking published in 1933. Other guest bartenders included Gianna Johns, bartender for Harvard & Stone, (drink – Bada-Bing circa 1930) Una Green, bartender for Faith & Flower and St. Germain Brand Specialist (drink – Nectar & Manners circa 1879) Brynn Smith, beverage director of Rossoblu and Sotto (drink – Avonlea Fix circa 1879) and Sarah Robichaux, bartender at Botanica. (drink – A Fine California circa 1845) I would have loved to try them all but I would have ended up on the floor!

A note about another Museum of the American Cocktail event

The week before, I attended a soiree, sponsored by the MOTAC at the Sassafras Saloon in Hollywood. It was hosted by Backwards Distilling Company located in Mills, Wyoming. It’s a family run distillery that produces vodka, gin, and moonshine with a circus theme. I’ve been to other micro-distilleries and thought their products tasted like gasoline but this distillery is different. Their booze was amazing, especially their gin, and I was never a huge gin fan!  If you’re ever in Wyoming make sure to visit them.

You may also enjoy my post: The History of Drinking in Los Angeles – Vintage Boozing – Also inspired by a MOTAC event. (Disclaimer: I am not a big boozer but these boozy events are fun!)

Do you have any favorite cocktails for women – full throttle or virgin? Please leave a comment below.