Home » Sweet Potato and Vegetable Latkes
Privacy Policy This post may contain affiliate links for products I recommend. If you purchase, I may earn a small commission at no cost to you.

Latkas are Tradition!  Tradition!  (as she sings Fiddler on the Roof) during Hanukah. Those luscious and sour cream- apple sauce topped potato pancakes are hard to pass up. However, sometimes it’s better to break with tradition if you’re fighting a weight battle. The problem with most traditional latke recipes is that they’re high in calories. Some are even fried in rendered chicken fat. As an alternative, try my Sweet Potato and Vegetable Latkas recipe. It’s lighter and more nutritious and even more scrumptious. 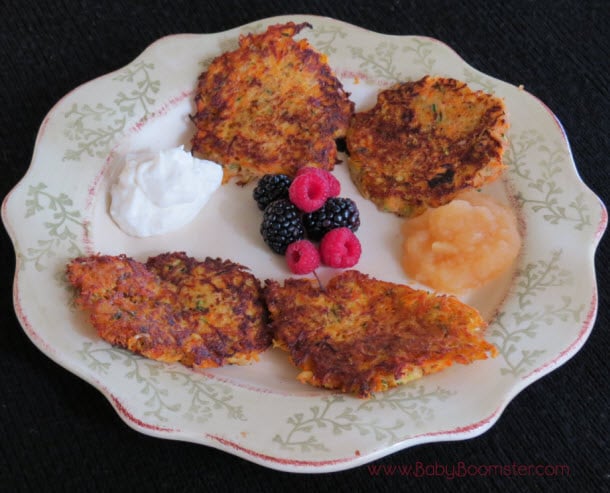 I’m the kind of person who loves smothering my latkes with sour cream. If you’re like me, try low-fat Greek yogurt instead. It’s healthier and still tastes great. If you’re more of an apple sauce person, use unsweetened and natural applesauce rather than a brand that has sugar added. Sometimes it’s the little foodie tweaks that make all the difference.

You may also want to experiment with the vegetables in the batter. Instead of using zucchini and turnips, try leeks, cauliflower, rutabagas, beets, or even apples.

Just a couple of notes:

I like using grapeseed oil to fry my latkes because it has a high smoke point and is loaded with anti-oxidants. It has a light, nutty taste and is low in saturated fat.

I used a variety of colored potatoes that I had in my pantry for this Sweet Potato and Vegetable Latka recipe. Yukon gold is one of my favorites because they’re naturally buttery.