Home » Baby Boomer Entrepreneurs – Your Success May Depend on Where You Live
Privacy Policy This post may contain affiliate links for products I recommend. If you purchase, I may earn a small commission at no cost to you.

I interviewed Kali McFadden, who is a senior research analyst for Lending Tree. They conducted a study on the Best Places for Baby Boomer entrepreneurs to live. 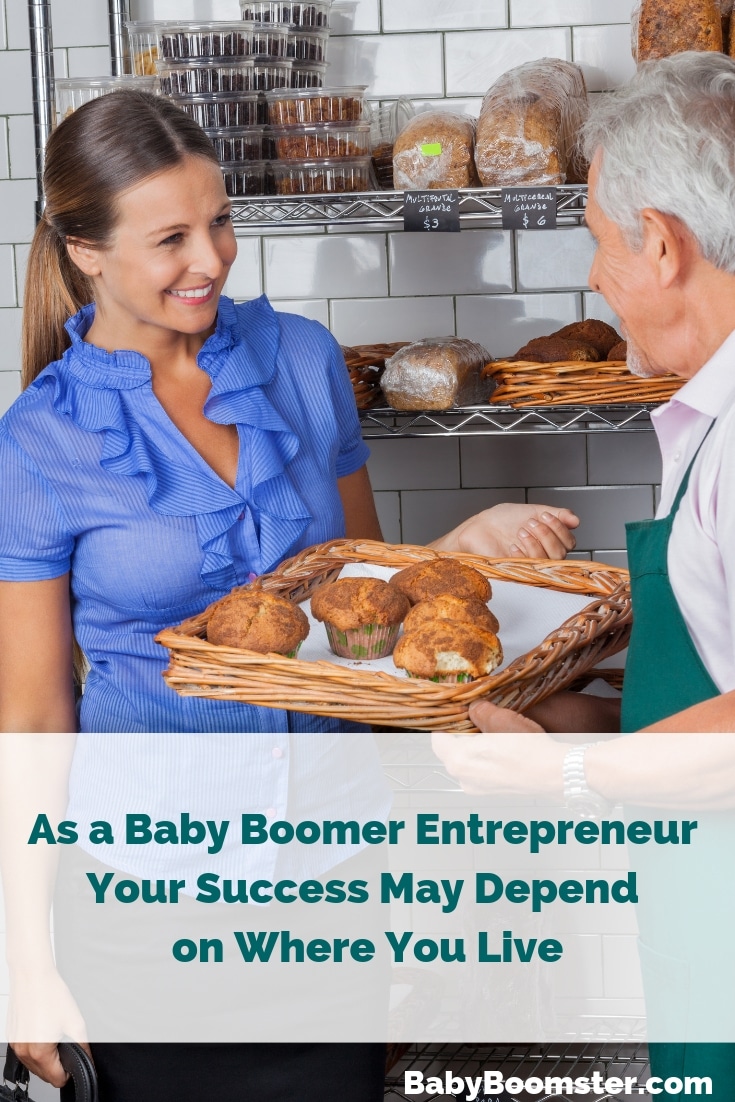 In a nutshell, here were the results.

My city, Los Angeles, is #9 on the list, which I was excited to hear about since I’ve been an entrepreneur and freelancer practically my entire life.

I asked Kali how the data was determined?

Census data was used from the American Community Survey. From their microdata, they calculated the median business income for people who were born between 1949 – 1964. (Baby Boomers) There were multiple questions about the respondent’s income, one of which was their business income.  Other forms of income were also included such as wages, Social Security, Retirement income, pensions, and passive investment income.

The median business income amount was based on people born between those years who were self-employed and actively engaged with the workforce. Some of the numbers are on the low side, but that determined the average. Most of the respondents have other sources of income, but their business is their primary source.

Some Baby Boomers share in a family business but it’s not their own business. Others have a second part-time job.

Were you able to determine what types of businesses Baby Boomers own?

Even though actual business types weren’t calculated, it’s a good guess that in the top cities, the higher earning business owners may be professionals such as doctors, accountants. It’s not unusual for someone post-retirement to decide to hang out a shingle. For example, a lawyer who has retired may choose to do lawyering on the side through an LLC.

Some Baby Boomer entrepreneurs have left corporate jobs to start their own businesses like massage therapy, and many others work as consultants, coaches, or mentors.

The skinny on Baby Boomer businesses

Lending Tree has a business loan platform called SnapCap and they looked at the generational breakdowns of people who founded businesses in the last five years.  Cities that had the highest ratio of new businesses started by Baby Boomers are San Francisco, San Jose, Boston, and Pittsburgh. It’s not that they’re making more money but that they’re starting new businesses currently.

Most Baby Boomers, in general, do not make a substantial living in their businesses. However, there are many who are doing just fine.  What the average median income amount tells us is that half the people are making more than average, and half are making less. Even though the average may be $47,000 there will be some making $400,000.  In truth, most Baby Boomer entrepreneurs make less than $13,000.

How accurate is the survey?

It’s a little tricky to predict because of the way people report their business income. Some interpret the question a little differently. For tax purposes, they may pay themselves a salary but do not consider it to be business income.  For a lot of people, the business income that they report doesn’t make up all of their income.

The cost of living in most of the top cities is high. Baby Boomers who have been sitting in their house for 30 years and have a smaller mortgage than most are at an advantage. But, that isn’t always the case. The financial crisis and other life calamities may have spurred homeowners to refinance, run up credit card debt, are still paying off student loans for their children, or dealing with medical bills. The concept of a relaxed retirement may not be in the cards and make it necessary to either continue working or become a Baby Boomer entrepreneur.

Have you started your own business post-retirement? Please leave a comment and tell us about it.