Home » Have You Considered Apartment Life as an Option for Retirement?
Privacy Policy This post may contain affiliate links for products I recommend. If you purchase, I may earn a small commission at no cost to you.

I’ve been a nomad most of my life and have lived in a variety of environments that included several large homes and apartments, a small Hollywood bungalow and a double-wide mobile home. Since the tender age of four, I’ve lived exclusively in Southern California in so many different places I’ve lost count. Now that I’m over 60, I’m having another go at apartment life. It has its advantages and disadvantages, but I’m mostly liking it. 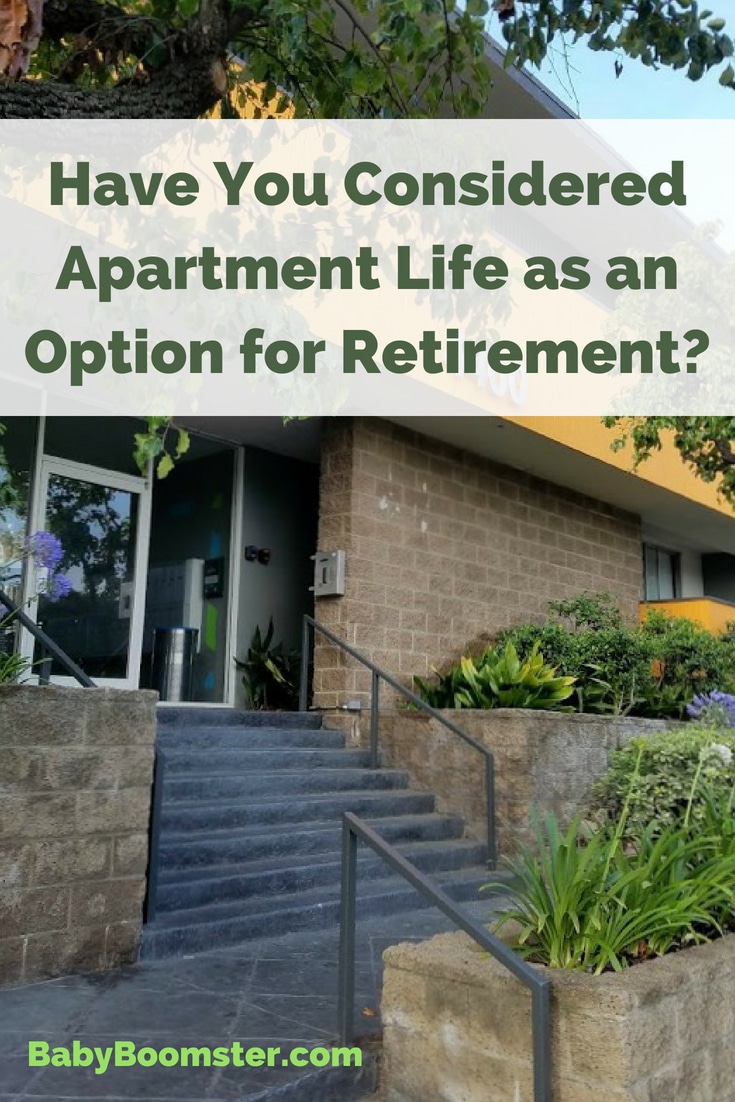 Starting in 2005, Doug and I have gone from a 2500 square foot 5-bedroom house to a 1450 square foot 2-bedroom mobile home to a 970 square foot 2-bedroom/2 bath apartment. Imagine all the junk we released to the Universe! (Well, at least I did. Doug’s still working on it.) I bought the big house to accommodate my two kids as well as Doug who moved in after my husband died. He had some money at the time and I thought we were set to stay for a while.

The kids moved away, Doug lost his job, we got hit by the financial crisis of 2008, and the house went into foreclosure. We then relocated to a cozy mobile home in “them thar’ hills.” The scenery was spectacular, but it was a 45-minute drive to everything we loved to do. Even buying groceries was a major ordeal. After our community manager asked us to vacate, (to illegally jack up the rent) we found a large apartment complex in Burbank located in an ideal location.

What I love about apartment life over 60

Apartment tenants, as opposed to those in rental homes, aren’t at as much at risk of being asked to leave if the building changes owners. I’ve had to move several times from rental homes after the landlord sold it.

We have cool amenities. Our apartment is in a complex of 30+ buildings owned by one rental firm. The office has a fully-equipped fitness center (which I haven’t used yet) that takes up two floors. They have a “get to know your neighbor” mixer almost every month, and a gourmet food truck stops by once a week. We also have a stacked washer and dryer that came with the apartment and garages for both cars.

If something goes wrong in our apartment we put in an online service request and a handyman shows up within 24-48 hours. There’s an emergency number if we require immediate assistance (like a flood – which happened when our neighbor’s water heater leaked into my bedroom)

Utility costs are minimal. When I lived in the big house the utility bill was like a mortgage payment, especially in the summer.  Our electricity and water bill is a fraction of that for the apartment.

We don’t have a yard to maintain. The courtyard in our building has a pool, BBQ’s and a grassy area to sit. It’s taken care of by gardeners and maintenance workers. Our building key lets us into all the other complex courtyards so if we don’t want to use our pool, we can use another one. At one time I owned a house with a pool and the pool guy would hand me enormous bills whenever he “fixed” something, which was frequently.

Pets are welcome. We have two small dogs, but large dogs are welcome too. I don’t think it’s an ideal environment for a large dog to live in an apartment, but they seem to be happy. Our pets get to meet each other when we take them out for walks. There are doggie poop containers in front of most of the buildings that are cleaned out every day. Living in an apartment with a dog forces you to get out and exercise.

Our apartment is on the ground floor.  Stairs can be a bitch when you get older. It’s not that I have difficulty climbing them. (I walk 6 miles a day) but there’s more risk of falling especially when you’re carrying sacks of groceries. If you decide to go the apartment route, you may want to consider a ground floor unit or a building with elevators. The only scary part about living on the ground floor in LA is that we have earthquakes. I don’t want to be crushed like a bug when the big one hits.

We found a location we love. It’s just a stroll away to nearby restaurants, the grocery store, (Von’s, Trader Joes, and Whole Foods) Post Office, Bank, and Happy Hour! That saves us a ton in gas. Los Angeles has plenty of things to do and is a great place to retire if you can afford it.

Security – We have a guard who patrols the complex at night and there’s always a neighbor nearby in case of emergency.

The community is connected online – Our complex has a Facebook group for all the tenants. We can sell furniture, announce events, get together for drinks, flirt, you name it. Come to think of it, Doug’s been on there a lot. He may be trying to pick up a sweet young thing. Good luck with that, Buddy.

RENTCafé did a study and found that As America is slowly graying (22% aged 60+), seniors are giving up homeownership in favor of the flexibility and convenience of renting. Renters households aged 60 and up drove the past decade’s surge in renters, with a 43% increase, from 6.55M in 2007 to 9.37M in 2017, outpacing the increase of owner households and growing faster than younger renter groups.

Over 55 community or not?

There are advantages to living in an over 55 community whether it’s an apartment complex or a gated community. One of my friends moved from a home she owned in the San Fernando Valley to a retirement community near Laguna Beach. It’s called Laguna Woods and was formerly Leisure World. She’s having the time of her life performing in theatrical products, singing, and has even fallen in love. There are multiple clubhouses and all sorts of activities. Her community was featured on 60-Minutes when they showed the results of a survey on why people live to be 90+.

Our apartment complex has residents of all ages. A large number are film students from the New York Film Academy. The rental company has a deal with the school to feed students into the complex. Others are members of the film business because we’re located within walking distance of Warner Brothers, Universal, Disney, NBC, and ABC. It’s not uncommon to see lights, cameras, and action going on at all hours of the day and night. Our building is quiet but some of the others are party central. I guess we lucked out.

The film students come from all over the globe and many have rich parents who pay for their apartments. What surprises me is that so many of them smoke. That’s a little weird in La La land where people tend to be health conscious. They can’t smoke in the courtyards so they sit in front of the buildings and indulge their stinky habit. I’d like to smack them in the head sometimes, especially when I’m walking and get a whiff. There are also plenty of health nuts who jog, take exercise classes, and lunch at several vegan restaurants nearby.

A couple of pot smokers live in the front apartment. They smell like they’re smoking skunk and we’re hoping they vacate soon.

The disadvantages of apartment life

Our current living situation is grand except when it’s not. It would be ideal to own a house or condo but because we made poor money decisions in the past, that’s not an option. Rent prices in Los Angeles are sky high.

Living among lots of students means they’re often messy. Garbage doesn’t always make it into the trash bin and there are beer bottles, cigarette butts and dog poop on the grass. The maintenance crew gets a workout after a weekend of parties but they do a great job.

Our complex is well kept up and maintained, but once in a blue moon, a monster cockroach runs across our floor. I’m not kidding when I say monster! A three-inch bugger scared the shit out of me when it scurried across my bathroom floor. I poured peppermint oil in the floorboard cracks and it helped. Roaches hate it. Doug is a hoarder and still has cardboard moving boxes piled up in his room. The cardboard attracts creepy critters. All I can say is I’m glad I have my own room. If I could afford it, I’d live by myself but first I’d have to win the lottery.

Apartment life is great if you live in a nice neighborhood but can be awful if you don’t. It’s worth paying a little extra for convenience and safety.

Our rent gets increased every year because we aren’t under rent control. It would be nice if the leasing office offered senior discounts because many of us receive Social Security and sometimes pensions that arrive in our bank accounts like clockwork.

As you can see in the photos, apartment life means putting up with weird decorating choices. Our building was recently repainted with bright orange accents to match the leasing company’s brand colors. Most of the tenants in our building were less than thrilled.

If apartment life for us doesn’t work out, maybe my next move will be to someplace exciting like Spain. Or, I could always try living in an RV. I haven’t tried that yet. LOL

Have you ever lived in an apartment? Would you consider living in one in retirement? Please leave a comment below.