My journey has been an interesting one. From my youth growing up with a major league baseball player for a father. To my middle age, flirting with pop music stardom and life on the road. To now, navigating life in my 60s as an Entertainer and cancer survivor. The one constant that has kept me sane and positive, has been music. Andy Rosen (known as Goat) Yesterday's Tears … END_OF_DOCUMENT_TOKEN_TO_BE_REPLACED 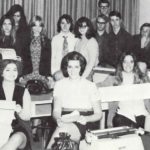 It was inspiring to watch the Parkland students so articulately express their thoughts after the horrendous shooting they personally experienced. Their debate classes paid off. Now they are making a huge difference in the political landscape even though some “adults” protest they should have stayed in class and have even threatened them with bodily harm. It made me think of the … END_OF_DOCUMENT_TOKEN_TO_BE_REPLACED

The Baby Boomer generation extends from 1949 – 1964 and I’m smack dab in the middle, born in 1953. I was 10-years-old the day President Kennedy was assassinated and remember it like it was yesterday. The fact that classified documents dealing with the assassination are being released to the public after 50 years is a big deal. Who doesn’t wonder what really happened and why? … END_OF_DOCUMENT_TOKEN_TO_BE_REPLACED

And they’re off . . . drinking a Racetrack Bloody Mary and watching the horses run at Santa Anita Park. That’s what my friends and I did and it was a ball. Here's the recipe I created that was inspired by Santa Anita Park’s Macho Mary.  (More about my visit below) Racetrack Bloody Mary   Print Prep time 15 mins Total time 15 mins   If you want to … END_OF_DOCUMENT_TOKEN_TO_BE_REPLACED

There was Motown, the British Invasion, and  TV created pop bands like the Monkees, but not everyone remembers early rock and roll bands that came from the heart of East LA. Other than Richie Valens, Chicano (Mexican American) bands were mostly popular locally and were virtually unknown nationally. The musical, Eastside Heartbeats, currently being performed at Casa 0101 Theatre … END_OF_DOCUMENT_TOKEN_TO_BE_REPLACED