Home » San Juan Capistrano: A Colorful Glimpse of California History
Privacy Policy This post may contain affiliate links for products I recommend. If you purchase, I may earn a small commission at no cost to you.

If you grew up in California as I did, you studied the California Missions. Every 4th grader does a mission project. I remember doing mine when I was a kid and I helped my son and daughter do theirs.  Because of that, we’ve visited several missions over the years. One of my favorites has always been Mission San Juan Capistrano. 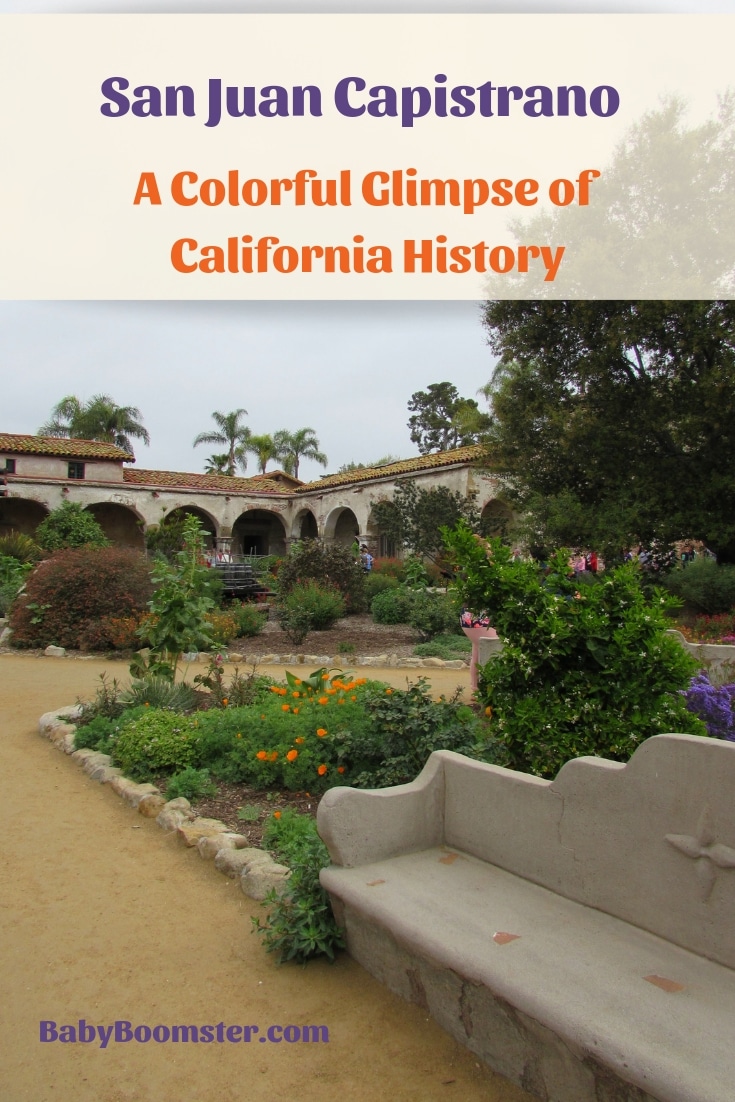 When the Swallows Come Back to Capistrano – it was just past swallow time when I was there, but the swallows have been landing elsewhere, lately.

Read about the swallows here

The mission was founded in 1776. It was the birthplace of the OC (Orange County) because it was the area’s first settlement. The missions were built by Spanish priests to convert the Native Acjachemen Indians to their religion and teach them the Spanish language. (The missionaries called them “Juaneño” to distinguish them from the native Indians of other missions) Their presence at the missions also helped to prevent other countries from taking over California.

Ships would land at the Dana Point Harbor nearby from New England. The missionaries traded cattle, hides, and tallow (for candle-making) with the sailors in exchange for needed goods and created a profitable business.

Mission San Juan Capistrano was one of the first locations wine was grown and produced in California. I wrote more about this fact in a previous post about the history of drinking in Los Angeles,

Serra Chapel (named after Father Junipero Serra, who started the first 9 missions) is the oldest chapel in California.

Click on all the smaller images below to view full-size.

It was used for services until the construction of The Great Stone Church, was completed in 1806.  Only six years later, in 1812, the new church, built out of limestone, was destroyed by a 7.0 earthquake. Forty worshippers and two boys were buried under the rubble. The remains of the church still stand as well as the magnificent bells. Services resumed in the Serra chapel during the 1920s and are still held there to this day.

The missions thrived until Mexico gained independence from Spain in 1821. They then went into decline until the Mexican government began selling them to individuals in the 1830s as private haciendas and they became secularized. The privatization of the missions prevented them from decay for several decades.

John (Don Juan) Forster bought the San Juan Capistrano Mission in 1844 for $710. (the equivalent of $15,000) He married the sister of one of the former governors of California. They lived in the Friar’s quarters for the next 20 years, with additional families living in other parts of the mission, until President Lincoln signed a proclamation to give the missions back to the church in 1865. Forster also owned land in the area where Mission Viejo and Camp Pendleton are today.

After the church gained back control of the missions they began to decay until the National Park Service and preservationists raised awareness. In 1910, Father St. John O’ Sullivan (The Great Restorer) led an effort to revive the San Juan Capistrano Mission to its former glory. In the early days of Hollywood, it was used as the location for several films including D.W. Griffith’s “The Two Brothers.” Johnstone McCulley, who created the character of Zorro made the mission the setting for his novella “The Curse of Capistrano.” It was later made into a movie called “The Mark of Zorro.”

The Los Rios Historic District is the oldest residential neighborhood in California. Soldiers and workers who helped construct the mission built houses around it to live in. Only 3 of the original 40 adobes remain today. The Rios Adobe, built in 1794, is the oldest residence on the street still occupied by the same family. The family currently has offices there.

Most of the board and batten houses on Los Rios Street were built in the early 1880s by European immigrants. Original families from that time still either live in the neighborhood or have converted the buildings into coffee houses, shops, and art galleries.

I love that the Amtrak Station stops in the center of the neighborhood. It’s easy for me to jump on a train from Los Angeles and be in San Juan Capistrano within a couple of hours without driving in traffic.

If you’re there and looking for a tasty lunch, have a bite at The Ramos House Café which was built in 1881 by one of the oldest families in the area.

The Cottage Gallery on Los Rios Street is housed in one of the historic homes. It was built in 1890 by a woman who was 100% Native American. When the census came around she told them she was only 50%. Her relatives now complain they got screwed because they can’t claim to be full-blooded Native Americans.

She installed the first bathtub in San Juan Capistrano and rented it to out to Caballeros for 10 cents a bath, giving her enough income to buy more real estate. A woman named Stanfield who had 12 children rented the house from her and lived there for decades. When both women passed away there was an argument about whether it was a rental or rent to own and it remained in probate for 85 years.

The house wasn’t sold again until 1998 and when it did the backroom still had a dirt floor. The Stanfield’s used an outhouse until the 1960’s when a bathroom was finally constructed. There was a rumor that Ms. Stanfield was a madam but was always well-loved and revered.

The Cottage Gallery has been in operation for 3 years and displays the work of 40 professional artists. One of them is always there and available to talk to shoppers.

While I was there, I enjoyed lunch and a wine tasting at the Rancho Capistrano Winery. It’s a family-owned winery that offers handcrafted wine, pizza, appetizers, salads, and fabulous desserts.

Mmmm. I can’t wait to take the train and go back.

Thank you to Ellen Bell of OC Day Tripper for her lovely tour of Mission San Juan Capistrano.