Home » What Would Walter Cronkite Say About the News Today?
Privacy Policy This post may contain affiliate links for products I recommend. If you purchase, I may earn a small commission at no cost to you.

Growing up during the 1960s, there were two main sources of news: Walter Cronkite and the Huntley and Brinkley Report. Our family was a fan of Uncle Walter. We watched him as he sadly took us through the assassinations of President Kennedy, Robert Kennedy, and Martin Luther King. We also celebrated with him when the Neil Armstrong set foot on the moon. He was a man you could trust to get the facts. 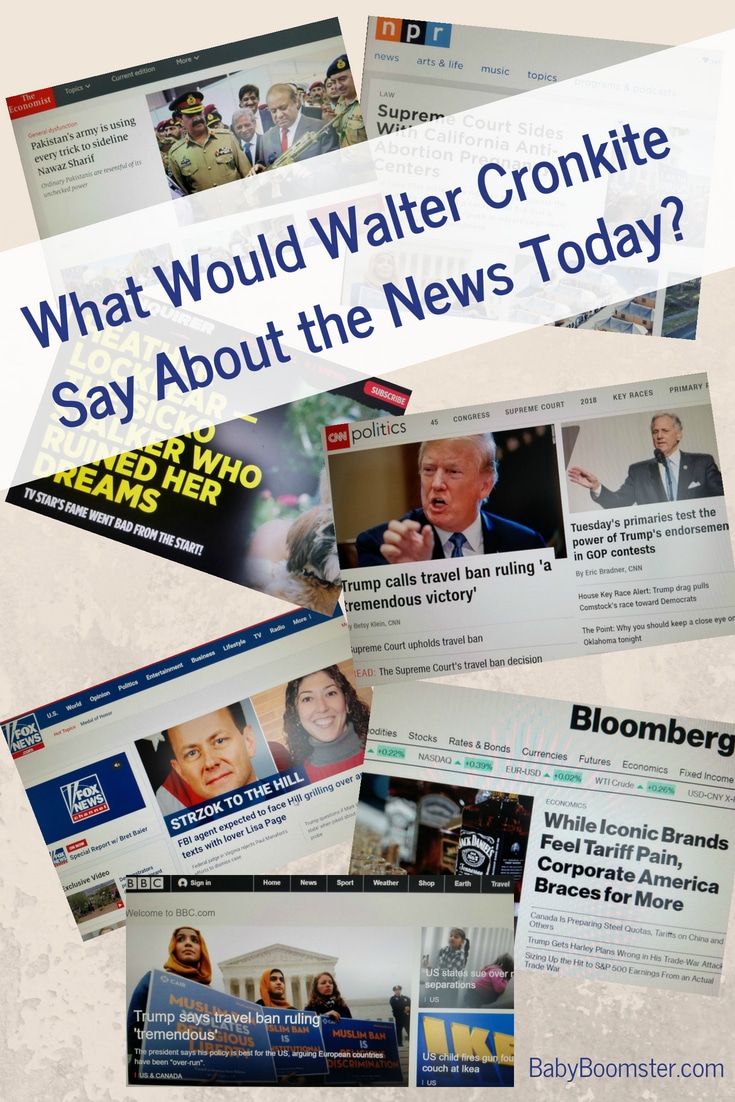 The news has grown more convoluted and nasty every day. It’s hard to know who to trust anymore. For one thing, there’s so much of it. In addition to stalwarts CBS, NBC, and ABC, there are now a plethora of cable news channels.

CNN made its debut in 1980 and runs news 24/7. We watched the first Gulf War in front of our eyes in real time with Wolf Blitzer commenting as each bomb dropped. It’s now the premiere channel for breaking stories. And though, some may disagree, it focuses on facts and attempts to present both sides of the political spectrum.

Not all news channels are fact-based

Fox News arrived in 1996 after Roger Ailes left America’s Talking (which is now MSNBC) It was founded by Australian born American media mogul – billionaire Rupert Murdoch. He appointed Ailes as permanent CEO. The channel has been known for its controversial personalities like Bill O’Reilly, Sean Hannity, and the President’s favorite, Fox & Friends. Ailes resigned in disgrace, and Bill O’Reilly was fired because both were accused of sexual harassment.

The channel is known in some circles as State TV, because of it’s devotion to the policies of the Trump administration. It’s been compared to the news outlets of Kim Jung Un and the Soviet Union. Fox has openly promoted conspiracy theories that were later debunked on FactCheck.org and Snopes. It’s a good idea to check both of these sites before posting on Facebook, no matter what side you’re on.

According to Ranker, the top 10 most trusted newscasters in 2018 are:

It’s nice to see accomplished Baby Boomer women included. Shepard Smith has been frequently cited as a trust-worthy news anchor despite the fact he works for Fox.

What to watch out for in your news sources

MarketWatch put together a chart that graphs news organizations in terms of how they swing left, right, are opinionated or slip into propaganda. (shown in the red box)  The red box includes Fox News (hovering at the top between propaganda and opinionated) Blaze, Occupy Democrats, Breitbart, National Enquirer, the Palmer Report and several others.

Another intriguing list to click on is the 10+ Independent Online News Sources and Why America Needs More of Them. They rate news sources for objectivity, bias and talking heads. You may want to check out  Reason, The Christian Science Monitor, Truthout, Reuters, Democracy Now!, ProPublica, The Center for Public Integrity, Reveal, AllSides, C-Span, Who, What, Why, The Intercept, Consortium News, Mint Press News, and Newsbud.

Is fluffy news as bad as fake news?

It’s possible that Trump is in office as a result of fluffy, watered down news, mostly seen on local channels. During the campaign, he was castigated for his bad behavior and celebrated by his followers on cable news channels but treated mildly by local news personalities in favor of car chases, and cats stuck in trees. The average person is more interested in what is happening in their town, weather, & sports, rather than national politics.

Understandably, those stations are supported by local sponsors who don’t want controversy. However, that approach is a determining factor for what happens during elections.  The Sinclair Broadcast Group, for example, made their local news stations give the same speech to millions of viewers pushing their own bias that was called out by CNN.

What would Walter Cronkite say?

Uncle Walter is probably shouting uncharacteristic curse words as Huntley and Brinkley empty another bourbon bottle while they chain-smoke cigarettes.

Where do you get your news and what do you remember about Walter Cronkite? Please leave a comment below.