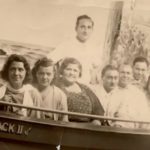 I’ve always been curious to find out more about my family’s ancestry and its roots. My late brother had spent time working on our family tree, contacting relatives, and putting pieces of the puzzle in place. I decided to take an autosomal DNA test using AncestryDNA.com  to see what it came up with. An autosomal test will locate cousins from all parts of a family tree based … END_OF_DOCUMENT_TOKEN_TO_BE_REPLACED

As I mentioned in my article about older actresses in Hollywood, it’s exciting to see women over 50 rocking it on TV and film. Baby Boomer actress Helen Mirren stars in "Woman in Gold" and it's a fabulous film. The film was released on Blu-ray™, DVD & Digital HD on July 7th, 2015. Here is a synopsis of Woman in Gold: The film is the remarkable true story of one … END_OF_DOCUMENT_TOKEN_TO_BE_REPLACED 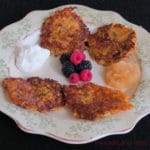 Latkas are Tradition!  Tradition!  (as she sings Fiddler on the Roof) during Hanukah. Those luscious and sour cream- apple sauce topped potato pancakes are hard to pass up. However, sometimes it's better to break with tradition if you're fighting a weight battle. The problem with most traditional latke recipes is that they're high in calories. Some are even fried in rendered … END_OF_DOCUMENT_TOKEN_TO_BE_REPLACED

I was privileged to attend an event at the Beverly Wilshire Hotel in Los Angeles honoring a man who was not only a Holocaust survivor but also a hugely successful businessman and philanthropist. At the time I attended, Max Webb was 95 years young. His story of how he overcame such extreme adversity was compelling. In his lifetime, he experienced unbelievable atrocities and … END_OF_DOCUMENT_TOKEN_TO_BE_REPLACED