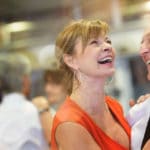 Do you ever wonder why some comedians live to 90-years old and beyond? Both Carl Reiner and Betty white are doing fabulous at 97. (as of this writing) George Burns lived to be 100. Phyllis Diller made it to 95, Abe Vigoda 94, and Milton Berle 93. Dick Van Dyke is still making us laugh and dancing at 93. They may not have been vegan, exercised every day, didn’t smoke or drink to … END_OF_DOCUMENT_TOKEN_TO_BE_REPLACED 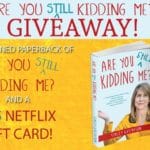 I wanted to let all my readers know that author and sister midlife+ blogger Stacey Gustafson is releasing her new book, “Are You Still Kidding Me?” I am including an excerpt from her book below.  Stacey is hosting a giveaway as well. Info is at the bottom of this post. I Netflix Cheated on My Husband - Book Excerpt by Stacey Gustafson I tried ways to end my deception, but … END_OF_DOCUMENT_TOKEN_TO_BE_REPLACED 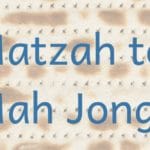 Several years ago, I met two funny Jewish sisters, Davida and Sybil, at a networking event. They have a business called Davida Aprons and sell Jewish gifts like matzah-themed tchotchkes, aprons, and other kitsch décor items always with a sense of humor. They’re both Baby Boomers and have been in business since 1980. Celebrating Passover, Hanukkah or having an event? – … END_OF_DOCUMENT_TOKEN_TO_BE_REPLACED

In the early 80s, I walked into The Improvisation in Hollywood. It was an ordinary evening, nothing special, but the list of comedians who showed up was epic. Robin Williams, Jay Leno, Bill Maher, Rosanne Barr, Brad Hall, Sam Kinison, Richard Lewis, Fritz Coleman and several more I can’t remember because it was so long ago. With the exception of Robin Williams, most were fairly … END_OF_DOCUMENT_TOKEN_TO_BE_REPLACED

Sometimes you have to let it all hang out and let people know who you really are. I decided to let it flow and write down what keeps me alive and vibrant. It's a list from my stream of consciousness. Here goes! I'm a woman, in my 60's who used to be cute, petite and sexy back in the day, but gradually started to look. . .should I say it? . . . Matronly. I'm working to do … END_OF_DOCUMENT_TOKEN_TO_BE_REPLACED