Home » Senior Sex: Two Women on a Mission to Educate the Public
Privacy Policy This post may contain affiliate links for products I recommend. If you purchase, I may earn a small commission at no cost to you.

I want to warn you upfront, the topic of this post is a little more spicy than usual because it’s about something we don’t often talk about – Senior Sex. If that makes you uncomfortable you may want to move on to another post. However, it’s part of life and just because we’re older doesn’t mean we’re dead, right? 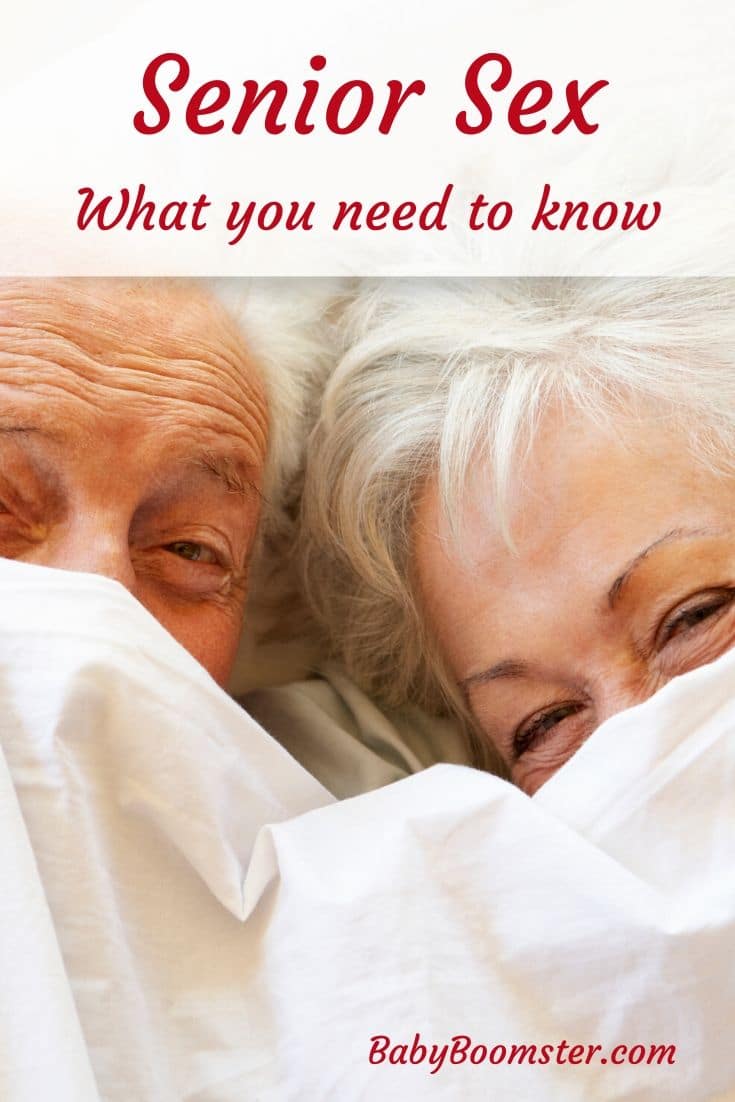 The reason I’m delving into this topic is that I was invited to interview two women who are experts in the field. Author and speaker Joan Price is a leading senior sexpert, and Jessica Drake is a well-known adult film performer.  Both have teamed up to produce an educational film about the joys and challenges of having sex as we age.

First, a little about Joan

Joan Price is a former high school English teacher who taught for 22 years. She later switched to writing and speaking about health and fitness, which she claims saved her life after an auto accident.

In 2000, after years of being single, she fell in love with artist Robert Rice and they became a couple in 2001. She was 57 when they met, and he was 64.  Robert turned out to be her great love. Their relationship was so dynamic, hot, and sexy that she couldn’t believe there was so little written about joyful senior sex at the time.

Several years later, when she was 61, she wrote her first book about it called Better Than I Ever Expected: Straight Talk about Sex After Sixty. It celebrates mature sexuality. Even though our society has evolved since then there are still negative connotations about seniors having fun in the sack.

How Joan and Robert met

In addition to writing and speaking about health and fitness, Joan also taught early morning aerobics.  When menopause hit her hard, she found that she had to set her alarm clock to wake up because it was interrupting her sleep patterns. Rather than teach aerobics at 6 and 7 in the morning, she decided to teach line dancing at night.

Robert had recently moved into her area. He loved dancing and was trained in many different dance genres. After searching for a place to dance socially, he found her class.

Joan says that a dance class is a wonderful venue to find a new relationship because it’s both social and physical. When you dance with a partner you communicate with your bodies. From there, you may start flirting and then, who knows what will happen?

But going from dance class to dance class looking for Price Charming may be a crapshoot. You may have more luck on an online dating site if you put dancing as one of your interests.

After 7 blissful years of love and lust, Robert died of cancer in 2008

Though their relationship ended with Robert’s death, it didn’t mean that intimacy was over for Joan. For the last 2 ½ years she’s been in a wonderful, nurturing relationship with another widower. They met through online dating and bonded because they had the shared experience of losing their great love. However, their bonding turned into more than that quite quickly. He’s now line dancing too!

Robert’s death spurred Joan into writing Sex After Grief: Navigating Your Sexuality After Losing Your Beloved.

Joan met Jessica Drake at several of the sex education/sex activism conferences they both attended including Woodhull – Sexual Freedom and Catalyst Con.  She was impressed by how articulate and knowledgeable Jessica was when she spoke on her panels and they both developed a mutual admiration for each other.

Jessica has been a sex educator for a decade in addition to performing in adult films. She also works as an activist for sex workers and sexual performer rights.

She produced a series of how-to sex education videos called Jessica Drake’s Guide to Wicked Sex. I won’t go into detail, but they are very explicit.

Jessica told Joan that she wanted to delve into more underserved markets like senior sex and invited her to collaborate with her in developing a film on that topic for her Wicked Sex series. After several years of talks and some trepidation, Joan asked her newsletter subscribers what they thought about the idea. Most responded positively and some told her what they hoped to learn from the film.

She decided to go for it and wrote the script for her narration. It gives viewers tips on how to deal with obstacles, communication, and safety. In the films the scenes with the participants are unscripted. They are real couples and we see them communicating what they need, obstacles they have such as pain or changing libidos, positions they want to try, and other issues as it flows in the moment.

The first couple has known each other for 50 years.  They were lovers in college, lost touch for a while, reconnected and went on to have a beautiful and tender long-term marriage.

The other couple met for the first time on the set. They were included to show what might happen if you’re newly dating and negotiating sex. Their segment goes into safer sex boundaries, what they like and don’t like, and how they interact with each other sexually for the first time. Both people were up to doing it on camera and discovered in the process they each had a kinky side that matched well. They only had a couple of private and public conversations to get to know each other and negotiate their hard limits but otherwise, they didn’t meet each other in person until the camera rolled.

The main question Joan gets asked is what to do when things aren’t working like they used to. Sex might be painful, there isn’t much libido, physical responses aren’t the same, physical issues make it hard to perform, etc.

She goes into depth on these issues in her books but recommends that if you’re having difficulties, talk to your doctor and tell him or her that sexuality is important to you. Most of the time, problems with senior sex arise from a physical condition that can be treated to some extent.  If your doctor can’t help you, they need to refer you to someone who can.

Jessica has been a top adult film star for over a decade and continues to perform in her 40s. She ventured into sex education in 2011 because she was continuously being asked for sex advice.

The more people she talked to, the more she realized there’s a massive lack of sex education. The advancement of technology has made the fantasy end of adult entertainment so readily available that people are getting their education through that rather than learning what happens in real life. Jessica feels that does them a disservice.

She talks to couples all the time and does events, workshops, Ladies nights, speaks at Universities, and sexuality conferences. Her celebrity attracts her audience and gets their attention enabling her to teach them about real-life sex issues.

Her collaboration with Joan was something she wanted to do for a long time because she was immediately taken by her messaging and her ethics as an educator.

One of the goals in the film is to cover how sexuality has changed over the years. What older people did back in the 70s may not be applicable now. One topic they deal with extensively is using protection with condoms, dental dams, and testing because sexually transmitted diseases like gonorrhea, chlamydia, and syphilis are spiking right now in the Baby Boomer/senior demographics.

Other concerns addressed in the film

Obstacles such as mismatched libido, a variety of physical changes in appearance, and communications are covered, but also how society lays out unrealistic expectations in terms of sexuality and aging.  Seniors become invisible, undesirable or the butt of a joke. You’ll see how the couples deal with their physical limitations because it’s common for older people to experience arthritis, achy joints, and trouble maintaining positions they were once able to perform.

The woman in the first segment has chronic pain and her spouse checks frequently to ask her how she feels and how he can adjust to make her more comfortable.

Another topic that’s addressed is using lube because sometimes it’s given a stigma. Jessica trains her viewers on basic lube education and what’s available. She says that people think lube is only for older people, but it makes some acts possible that you couldn’t do without it. Medically, it reduces the cuts and tears that can increase the risk of STDs. You don’t see it used in adult films because they’re supposed to be a fantasy but it’s in full view in her educational films.

There’s a perception that adult films promote an unrealistic view of reality, but Jessica says in the last 10 years they have become much more diverse showing an array of body types. We all have imperfections, even those who others perceive as perfect.

The senior sex film was shot with a small crew because none of the participants had ever been on camera before. Jessica’s other how-to films were filmed using experienced adult film performers. She also brought in a more sensitive camera operator.  His first instinct was to cover up the imperfections, but Jessica asked him not to because she wanted it to be real. A second film about senior sex is now in the works.

My honest impression of it all

I found the two women to be fascinating, knowledgeable and I thoroughly enjoyed talking to both of them. Sex is a part of most people’s lives and just because we’re older doesn’t mean we can’t enjoy it too.

From what I watched, I can tell you is that it’s very real, and not at all salacious. The educational aspect of it is valuable and Joan’s narration and tips are well thought out and helpful. However, at the risk of sounding ageist, watching older people doing it hardcore on camera isn’t my cup of tea, but it may be yours. If you’re adventurous, I invite you to visit both Joan Price and Jessica Drake’s website to see for yourself. For more about their collaboration and to order the film, click here.

I love that we can be open with senior sex. It’s important. And I appreciate both of the women’s entrepreneurial spirit. We often have a one-sided view when it comes to the adult film industry, but I can tell you that Jessica is business-savvy, smart, and passionate about what she does. Joan found a niche that resonated with her and she uses her educational background to her advantage.

Do you have questions about senior sex you want to know about? Please leave a comment below.