Home » Poland: 3 Cities Risen From the Ashes and Revived – Photos
Privacy Policy This post may contain affiliate links for products I recommend. If you purchase, I may earn a small commission at no cost to you.

My family roots go back to Poland in an area that for many years was part of Russia. My grandparents on my Father’s side came from Bialystok and migrated to America in the 1880s. His mother’s family lived in Augustov and also came to America around the same time. I always wanted to visit to see what it was like.

It’s a country that’s been conquered and partitioned multiple times. The Nazi’s nearly flattened it during WWII and killed almost its entire population of Jews. In its aftermath, it was swept up into Communism for decades until 1989 when the Solidarity movement forced it to collapse and freed it from its tyranny.

Now, it’s a member of the European Union, in the Schengen Zone, and has hosted climate conferences as well as the G20.

Although I’ve still traveled to Bialystok or Augustov, Doug and I flew to Poland to attend the CamerImage Film Festival in Bydgoszcz where he was invited to be a speaker. The festival celebrates cinematography and guests in camera business from all over the world attend. Doug is a retired camera operator and director of photography. We had a ball and attended elaborate parties every night at our hotel savoring plenty of Polish food and drink.  After the festival was over, we took a train to Warsaw and then to Krakow for 2 nights each before flying to Budapest to board an AmaWaterways river cruise that ended in Prague.

Below are some of the photos from our trip to Poland 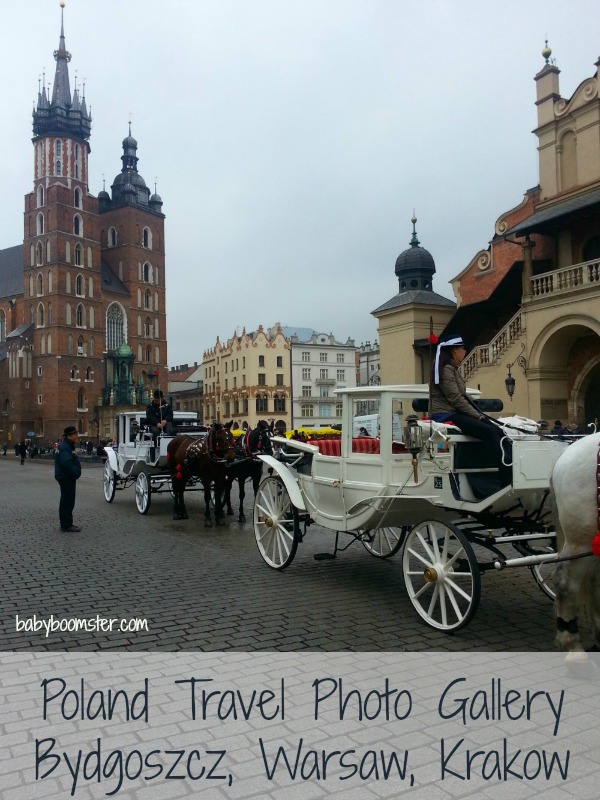 As far as I’m concerned,  Poland today is an amazing destination to travel to. The people are friendly, the food is yummy, and it’s delightfully inexpensive.  You can have a 5-star meal for about $30. Even though the country is part of the EU, they still use their country’s currency – the Polish złoty, which makes it easy to have a fun time for less.

For more details on our entire 3-week trip, click the links below:

To view the images in this Poland travel photo gallery FULL SIZE, click on any of the individual images below to bring up the gallery. Please share them on Pinterest.  If you use any of them, please link back to this page in your post.

I loved our time in Bydgoszcz because it’s a small town where you can really get a feel for Polish life. It’s charming and sophisticated with its Old Town Market Square, mystical Gothic Cathedral and stunningly modern Opera Nova opera house. Walk along the Brda Riverwalk, enjoy traditional Polish food at the Karczma Młyńska restaurant built in 1873, or have a Zywiec beer at a local brewery. We stayed at the Hotel Sloneczny Mlyn which was the center of all the festival parties.

When Doug wasn’t speaking we were able to stroll along the river and into the Old Town. It was November and chilly but a couple of shots of Polish vodka warmed up right up.

Some of the highlights of Bydgoszcz include colorful houses of worship, the Old Mill, several specialty museums, the Old Town Square and various monuments and sculptures throughout the town.

We originally landed in Warsaw and then took a cab to Bydgoszcz and after we landed the first thing we saw were McDonald’s “Golden Arches” peering out of a field. It wasn’t exactly the greatest first impression of the city. But when we came back on the train from Bydgoszcz to stay in the old town center we saw how beautifully the city was reconstructed after WWII. During the war, the city was almost completely flattened. Expert artisans were able to painstakingly replicate it almost exactly how it was before it was destroyed.

We stayed in the delightfully quirky Castle Inn across from the Royal Palace and made use of a  local guide to show us around. Because it was winter, we were the only ones who joined the tour but it was still fabulous. She took us to the palatial Łazienki Park, the site of the Jewish ghetto, and the Jewish Memorial.

Here are 15 things you don’t want to miss in Warsaw.

We took an old rickety train from Warsaw to Krakow and as soon as we walked into the old city, I was completely infatuated. The old town square is a UNESCO Heritage site and is one of the largest medieval squares in Europe. It’s also one of the few cities in Poland that wasn’t destroyed during WWII. It still looks almost exactly how it’s been for centuries. You can shop for authentic Polish products from multiple vendors in the cloth hall, enjoy the most amazing desserts at Wedel’s Chocolate store or go for a tour of Wawel Castle. Our hotel, Holiday Inn Krakow City Centre, was just outside the old city gates and within walking distance.

We weren’t there long enough to visit the famous salt mine or Auschwitz, but on our tour, we stopped in Kazimierz, which was the Jewish section and where Schindler’s List was filmed.

The Old Town has many medieval cathedrals, schools, residences, hotels, and restaurants within it so make sure to book enough time there to see it.

Here are 15 things you don’t want to miss in Krakow.

You may enjoy these Polish inspired recipes