Home » How To Overcome Tough Challenges Even When It’s Hard
Privacy Policy This post may contain affiliate links for products I recommend. If you purchase, I may earn a small commission at no cost to you.

It’s rare to live six decades or more and not have to face a difficult situation. As tough challenges go, nothing I’ve seen was like the awe-inspiring-teeth gnashing rescue of the 12 boys and their young coach trapped beneath the surface of a cave in Chiang Rai, Thailand. The news they were finally safe brought tears to my eyes and relief for my jittering stomach. Those brave kids and divers may have been thousands of miles away, but I felt like they were neighbors. 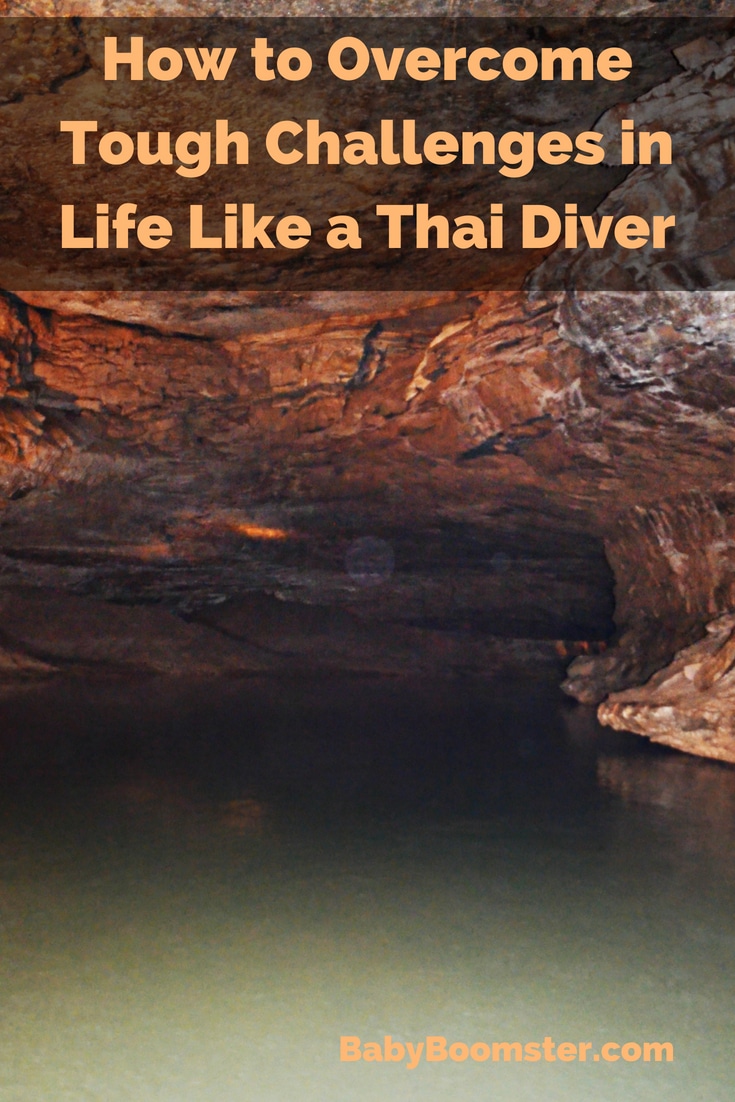 Can you imagine the mental state of the divers as they slithered through tiny crevices deep below the Earth not knowing if they would make it out alive? Sadly, one of them died from lack of oxygen. They had to act quickly because monsoons were threatening and terrified parents were waiting outside praying to see their children again. It took a steel mindset for them to succeed and they did it, much sooner than expected.  To everyone’s relief, everyone came out in good shape.

What can we learn from their experience to overcome the tough challenges we may face?

Hopefully, you’ll never get trapped in a cave, but even small obstacles can bring you to your knees if you aren’t prepared. They may be personal, financial, or physical, but what was successful for the divers may help you get through the worst of times.

Cut out the noise

The rescue team was bombarded with input from scientists, international military, and even Elon Musk who arrived with a small submarine. They immediately blocked the media from the cave area, so they could work without distraction and devise a plan. Meanwhile, the coach, who had spent 10 years in a monastery after losing his entire family, (talk about tough challenges) taught the trapped boys meditation to help them stay calm and made sure they were healthy and safe.

Once the plan was decided on the team worked diligently to execute it. They waited for just the right moment to go in to avoid unnecessary risks. It was important to get the boy’s food, oxygen, and medical care, in case of a delay and to teach them how to dive and swim. Their route through the narrow passageways was mapped out in detail. If they hadn’t honed a precise strategy or let too many ideas steal their focus, the outcome could have turned into a tragedy. In life, gather the facts, determine the steps needed to achieve your goal, and then follow it through until it’s completed.

Work as a team

It was inspiring how well the rescue team worked together to successfully get the boys out. They had it down to a science. If you face an obstacle in life, realize you’re not alone. Don’t try to do everything yourself. Let others, who are capable, help, and support you.

Keep your eye on the goal

Although there were tough challenges to overcome, the team never lost focus and carefully navigated the cave until every boy was taken out safely. If you visualize your ideal outcome in your mind, you have a better chance of achieving it.

The rescuers had to stay strong to accomplish their tasks. They didn’t rush, made sure to rest, took the time they needed to re-charged their oxygen tanks, pumped sufficient air in the cave, drained out excess water, and then proceeded. Anxiety, fear, and depression takes a toll on the body. If you don’t take care of yourself first, it makes it harder to overcome adversity.

Believe you can do it

When doubt sets in, it can steer you down the road of failure. The fact that the rescuers took the 4 strongest boys first and succeeded, gave them the confidence to risk their lives two more times. It helped to propel them through dangerous murky water and the fear of losing oxygen. Having a strong belief system is powerful and can get you through the harshest circumstance.

Don’t stop until you get there

Panic in a difficult situation always makes a bad situation worse. The team pressed on, despite their fears until every last person was out of the cave and off to the hospital.

Next time you are afraid to push through tough challenges think of the Thai Divers, the rescue team, the brave boys, and their coach.

What mental techniques have you used to get through tough challenges? Please leave a comment below.