Home » Are You Curious About Your Roots and Immigrant Past?
Privacy Policy This post may contain affiliate links for products I recommend. If you purchase, I may earn a small commission at no cost to you.

With all the talk about the invasion of the migrant housekeeper/gardeners, which is blatant fear mongering in my opinion, I thought it would be appropriate to write about my family’s immigrant past and their arrival in America. 99% of Americans have ancestors who came to the U.S. from another country. According to a 2012 study, only 1.7 percent of the US population is 100% Native American due to interracial marriage or rape in the past. 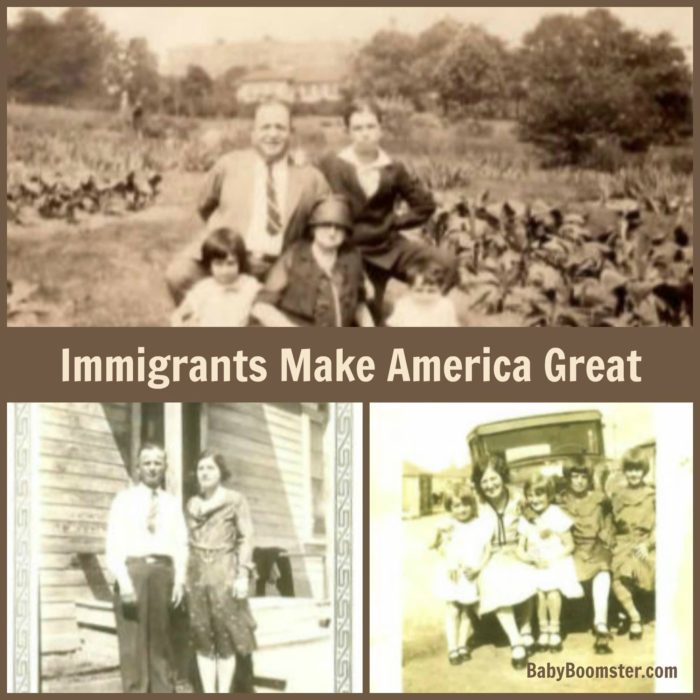 I had my Ancestry DNA test done a few years ago and my results show that I’m 52% European Jewish, 39% Eastern Europe and Russian and 9% in other regions of the Baltic region. The company did an upgrade to its database recently so now you can get an even more accurate picture of your family history.

Immigrants that are connected to the Eastern European Jewish side of my father’s family may have specifically come from Lithuania, Latvia, Belarus, Ukraine, and Western Russia. It’s also important to remember that borders in that area changed frequently. What is now Poland or Slovakia, may have been part of Russia or the Austro-Hungarian empire.

My mother’s relatives were non-Jewish Central and Eastern Europeans whose DNA may have specifically come from Eastern Slovakia and Hungary.

There are also traces in my DNA that may have come from the Baltic States primarily located in: Estonia, Latvia, and Lithuania.

We haven’t found much information about my ancestors prior to the early 1800s because most of them lived in small villages or shtetls. They may have been transitory due to religious or political persecution.

My father’s grandparents immigrated from Białystok, and Augustów, in northeastern Poland. My mother’s family on her mother’s side came from Zavadka in the Saris region of Slovakia and her father was an immigrant from Ukraine.

The Jewish Eastern European side of the family

The Forstadts (Forstot) and the Schoncite’s (Schoenzeit) on my father’s side, arrived in New York City as immigrants around 1880. I’m not sure what prompted them to come but I can imagine it was related to religious persecution. Jews had been in Poland since the Middle Ages. In the 14th-century, protections were given to them by Casimir the Great, allowing them to thrive in relative tolerance. During that time they developed a rich cultural heritage.

By the end of the 19th century, Białystok was mostly Jewish. The city became the capital of New East Prussia in 1795 but after Napolean invaded it was awarded to the Russian empire. They imposed geographic and professional restrictions on the Jewish community. With the exception of some well-off Jewish merchants, bankers and factory workers, most of the Jewish population was poor and lived in shtetls. During the 1880s – 1890s, after the assassination of the Russian Tsar, the Jews of Białystok were frequently terrorized by pogroms and routinely massacred.

Augustów went under the control of Prussia in 1795 and became a part of New East Prussia. In 1807, it was incorporated into the Duchy of Warsaw before it was annexed to the Kingdom of Poland in 1815. By the mid-1800s the city was a multi-ethnic and multi-cultural center of Poles, Russians, and Jews.

Because my great grandparents from both Białystok and Augustów left Poland for America when they did they were fortunate. The most intense hostility toward Jews ramped up after WWI and almost all the Jews in Białystok and Augustów were murdered by the Nazis during WWII.  If my family hadn’t left when it did I probably wouldn’t exist.

Both families settled in Manhattan. The Schonzeit’s had a butcher shop according to a relative who wrote a book about them. They lived in Manhattan Ward 12 – (north of E 86th St and W 86th St, plus Randall’s and Ward’s Islands)

The Forstadts lived in Manhattan Ward 17 (On the north by East 14th Street, on the east by Avenue B and part of Clinton Street; on the south by Rivington Street; and on the west by Bowery and a small part of Fourth Avenue.)  They had their ups and downs, especially during the Depression and my father often recollected his childhood after his family moved to Brooklyn near Coney Island. His father sold shoes and was a taxi driver for a while before owning a deli in Denver during the 1950s. My great grandparents, Joseph Forstadt (1857-1950) and Rebecca Glickstein (1858 – 1950) who were born in Białystok lived into their 90s and were married for 72 years. Their accomplishment was celebrated in the New York Times.

My great-grandparents, Anna Pavlik, and John Kosch were immigrants from Slovakia. They arrived in Forest City, Susquehanna, Pennsylvania in the late 1880s. My grandmother Anna was born there in 1899. The family traveled by covered wagon and arrived in Ramah, Colorado in 1900 where they bought a farm. By 1902, more of their Slovakian cousins followed. Some became farmers while others worked as coal miners at the Industrial mine in Superior, Colorado.

My grandfather on my mother’s side, Alexei Melinsky, was born in Seredyna-Buda, Ukraine, near Kyiv, in 1885 and immigrated to Pennsylvania in 1906. He also settled in Superior, Colorado to work at the mine and married Anna in 1917.

Alexei decided to go back to Russia in 1938 after being lured by Soviet propaganda but Anna was afraid to go there with their four daughters. He told her he would go first to make sure it was safe and send for them later. They received a letter from him from the Donbas in Ukraine (a coal mining area) dated March 27, 1938. He complained that his sister was always trying to borrow money from him. After that, he was never heard from again. We assume he either had a mining accident or was killed by Stalin as an expat. Expats were deliberately enticed back by the regime and murdered.

I read in the book, Freedom and Terror in the Donbas: A Ukrainian-Russian Borderland, 1870s-1990s, about the horror of Stalin’s Terror that took place in Ukraine. There is a history of atrocities, including cannibalism as a result of extreme poverty and violence. As we know from recent history, not much has changed.

An interesting note: When my grandmother Anna married Alexei he was not a US citizen. Because of that, she had to give up her US citizenship. She was able to become a “naturalized” citizen again in 1939 (after he left) with her former citizenship listed as Russian even though she was born in Pennsylvania.

Do you come from a family of immigrants?

I find delving into my family’s history to be addicting. (in a good way) If you want to learn more about your family’s roots, create an account at Ancestry.com. They have a free 2-week trial period.  Once you get started, you’ll have access to “hints” that will help you build your family tree. You can get a lot done in 2 weeks. Then, you can choose to become a member and continue to receive access to exclusive information.

If you sign up for Ancestry DNA, they will send you a DNA saliva test you can take at home. Send back your “sample” and wait for the results. You may be surprised to find you were never German at all! (like in their commercial)  Your DNA test results will also connect to your Ancestry.com family tree account making it even easier to connect all the dots.

Immigrants are what makes America great. Be proud of your roots.

Did you know that you can find out what breeds your mutt is? Read about dog DNA tests here.

Have you looked into your family’s immigrant past? Please leave a comment below.