Home » Downtown Los Angeles: Iconic Landmarks
Privacy Policy This post may contain affiliate links for products I recommend. If you purchase, I may earn a small commission at no cost to you.

I always enjoy going to Downtown Los Angeles (DTLA) whenever I get the chance. It used to be sort of rough, but in the last decade or so it’s experienced a revival. There are still some parts that are dicey, like most urban city downtown areas but it’s always an experience. What I love about it is that even though it’s not as old as Boston or New York,  it still has a history and a colorful past.

When you’re alone and life is making you lonely
You can always go . . . downtown
When you’ve got worries, all the noise, and the hurry
Seems to help, I know, . . downtown . . . ~ Petula Clark 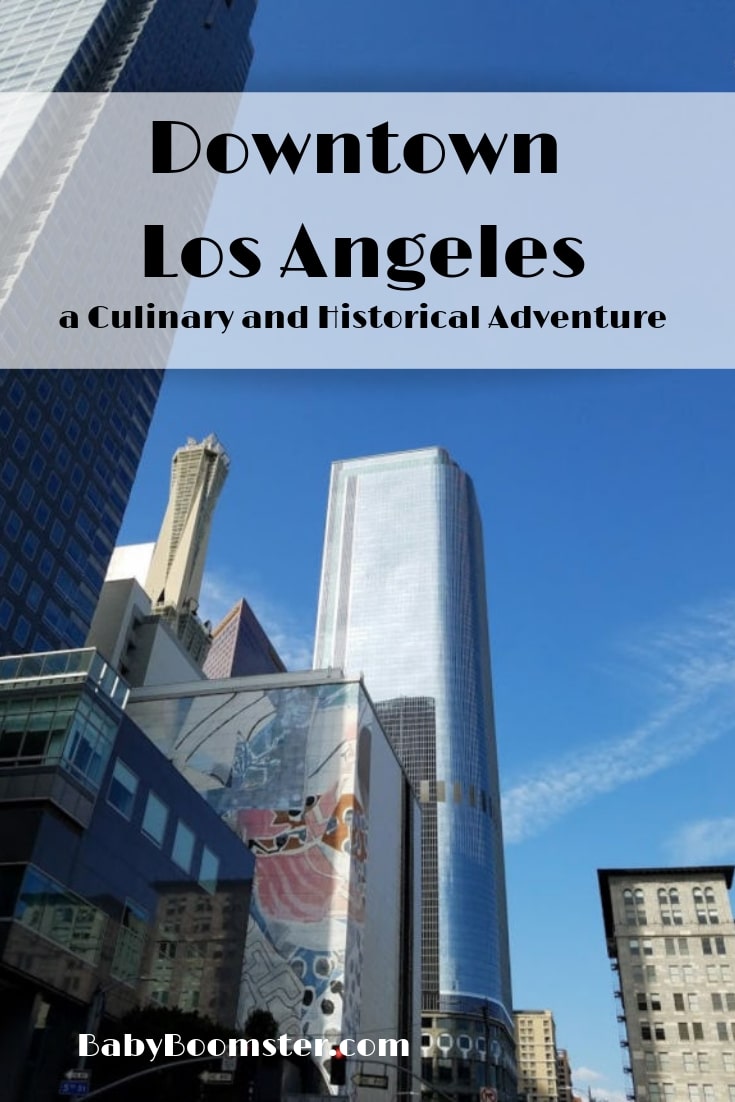 Check out the best things to do in the city here

For a while, I was going downtown Los Angeles to attend events at the Central Library. I always took the LA Metro Red Line (subway) from North Hollywood to avoid having to park and take it whenever I can.  It’s so easy.  The Central Library Goodhue building was built in 1926 and is a historic landmark. A new wing was added in 1993, named for Mayor Tom Bradley,  making the entire complex (officially renamed the Richard Riordan Central Library) the third largest library in the United States for the number of books and periodicals.

Just a few blocks from the Library is the historic Millennium Biltmore. It opened its doors in 1923 and was the site of some of the early Academy Awards. In fact, the Academy of Motion Pictures Arts and Sciences was founded at a luncheon at the Biltmore’s Crystal Ballroom in 1927.

It’s a gorgeous building and was designed with a mixture of Spanish-Italian Renaissance Revival, Mediterranean Revival, and Beaux-Arts styles. I love to walk through it whenever I get the chance.

Check out what the Biltmore looks like dressed up for the holidays here.

One of my favorite things to do in Downtown Los Angeles is to have lunch at the Grand Central Market. The open structure was built in 1917 and celebrates the cuisines and cultures of Los Angeles. In recent years, a number of new restaurant vendors have been installed along with several that have been there for decades.  Years ago, it was simply a place to buy vegetables, meat and have a quick lunch. The meat and vegetables are still available but the meat is now gourmet and the venue is a trendy place to hang out and network.

Here’s a Reuben sandwich I ordered at Wexler’s Deli inside the market. Wexler’s rates right up there with some of the best delis in Los Angeles like Langers or Brents.

Another vendor, EggSlut, always has a long line of enthusiastic devotees and is a market favorite. It used to be a food truck. I haven’t had a chance to eat there but would love to. Their signature dish is called 3 Slut. I can’t even imagine!

I’ve also snacked on oysters at The Oyster Gourmet. Yum!

Some of the food stalls and vendors in the market have been there for years and are family descended. Others have new owners. One stall is solely devoted to mole sauces. You can choose from a lineup of spicy flavors that are scooped out in dollops.

The Bradbury Building is just outside of the Grand Central Market. It was one of the film locations for the original movie Bladerunner and is an architectural wonder.

Directly across from Grand Central Market on Hill St. is Angel’s Flight, a small funicular railroad that originally opened on Bunker Hill in 1901 and closed in 1969 to make way for development. It was relocated in 1996 to connect Hill St. with California Plaza. It has closed and opened several times due to accidents and safety issues but is now open to the public.

Built in 1939, Union Station was and still is the hub for transportation in Downtown Los Angeles. It was refurbished in 2021 for the Academy Awards and is gleaming and gorgeous. Take the Amtrak train to points beyond (make sure to get your senior discount) the LA Metro, and bus lines.

Downtown Los Angeles is also the location of many old and majestic theaters. Sadly, many have closed their doors or are being hawked to movie company location managers like the Million Dollar Theater below.

There are some stunning Art Deco style buildings throughout the city of Los Angeles. The Eastern Columbia Building, also known as the Eastern Columbia Lofts, is a thirteen-story Art Deco building designed by Claud Beelman located at 849 S. Broadway in the Broadway Theater District of Downtown Los Angeles. It opened on September 12, 1930, after just nine months of construction. Some are in disrepair like the 537 S. Broadway building shown below and organizations are working toward restoring them.

Los Angeles architecture varies from Spanish to Art Deco to downright ugly. These old buildings have been Downtown fixtures since the early 20th century.

If you are in Downtown Los Angeles near Pershing Square, make sure to visit The Last Bookstore. It’s amazing and very quirky.

Do you plan on visiting Downtown Los Angeles in the future?

Find fun things to do in Downtown Los Angeles

Do you love going downtown?  Please leave a comment below and tell us what city you live in and what you love about your downtown.