Home » Central New York State: Where It’s Fun to go Chasing Waterfalls
Privacy Policy This post may contain affiliate links for products I recommend. If you purchase, I may earn a small commission at no cost to you.

“I cannot endure to waste anything so precious as autumnal sunshine by staying in the house.” ~ Nathaniel Hawthorne ~

I love waterfalls. Who doesn’t? Waterfalls are peaceful and majestic. They seem to have the same effect on us as fresh air after a thunderstorm rumbling through the area might. 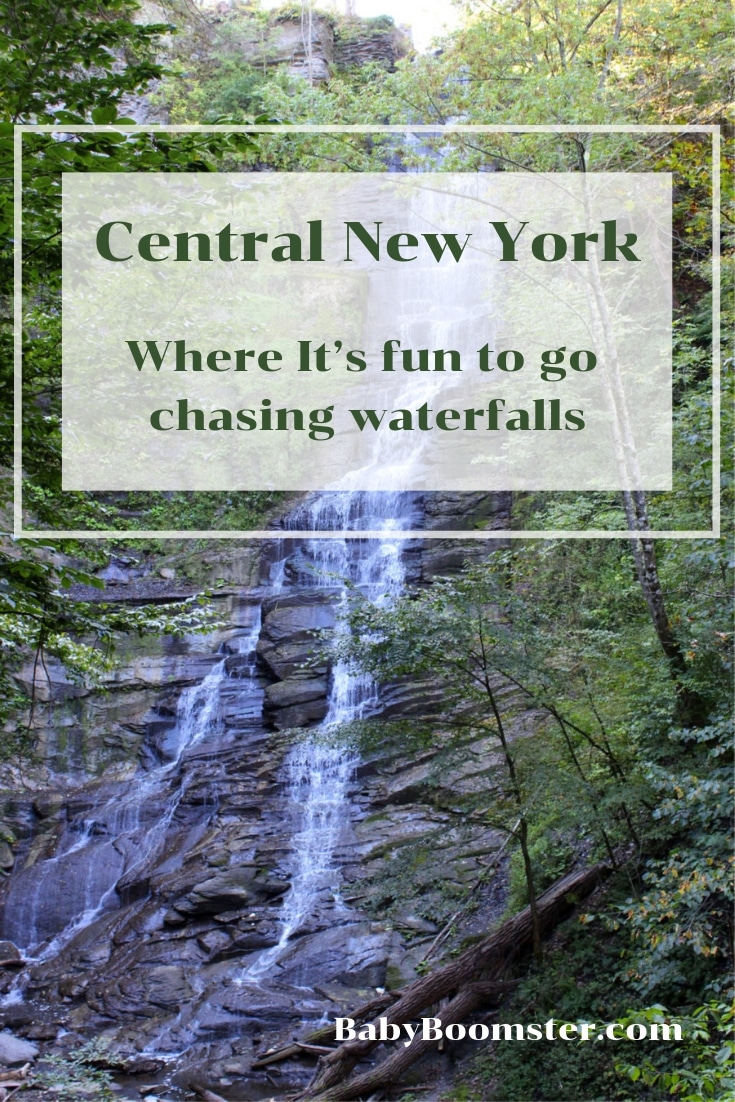 Whenever I have the chance to hike through the woods of New York, I relish the warmth of sunshine on my face. Sometimes I’m lucky and stumble upon a trickling stream that leads me forward, towards a cascade of water rushing over steep inclines, towards the bedrock below.

This breathtaking waterfall is 167 feet of nature’s mental therapy. Formed by glaciers melting, working their carving magic on the 400 million-year-old landscape, it’s no wonder Chittenango Falls was visited by more than 45,000 people last year alone.

In 1842, or thereabouts, a paper mill, two sawmills, a woolen factory, and sash factory operated on the property. Eventually, a portion of the rugged 193 acres sold to Mrs. Fairchild, a prominent member of the Ledyard/Lincklaen family in nearby Cazenovia. She’d established a fund to purchase the scenic waterfalls and went on to form The Chittenango Falls Park Association.

Many improvements were made, including an iron railing at the top of the falls and a turnaround for horse-drawn carriages, which offered the most alluring views of Chittenango Falls to people from all over the country.

Today, the park belongs to the state of New York and offers a variety of outdoor recreational activities. There are plenty of picnic tables, pavilions, hiking trails, and places to fish.

Aside from the stunning scenery, Chittenango Falls is also home to the ovate amber snail. This endangered species, discovered in 1905, can only be found here at the base of the waterfall.

Spending time out in the environment can reduce our stress levels. There’s just something about the act of breathing in the crisp air of Fall or the fragrant scent of Spring that lifts our moods, makes us feel like all things are possible, making many choose a natural setting when retreating from everyday stressors.

Nature heals us with its calming influence. Some say they feel their blood pressure lower after a walk in the woods, that clarity seems more readily available, that it distracts us from pain and heartache.

Pixley Falls is a beautiful 50-foot waterfall in the middle of the woods. There are trickling streams on either side, with rooted pathways that lead one down to the falls from many directions.

With over 350 acres, trails that meander through the woods accommodating hikers and skiers, access to miles of trout fishing, as well as open areas with picnic tables and grills for cookouts, it’s easy to see why outdoor enthusiasts spend anywhere from a few hours to an entire day there, alone or with their families.

It’s hard to imagine that Delphi Falls was once a privately owned waterfall. Family members living on the property were able to wake up to the rushing sound of not one, but two waterfalls every single day.

The 60 plus-acres park was recently acquired and is now open to the public. The spectacular waterfall and park, purchased by a retired professor for $900,000, was then sold to Madison County for $150,000, with the understanding it would be turned into a public nature preserve everyone could enjoy.

When I visited the two-tiered falls, One 60’ and the other 52’, they took my breath away. A long stone pathway led me to the foot of the lower falls, where I watched visitors take selfies and listened to old-timers from the area talk about how they sometimes were treated to a day at the falls because they happened to be friends of the family who lived there.

Folks were happy to learn that fishing is permitted, others were sad that there was no swimming allowed, but conceded it was for safety reasons. Amazed at how beautiful the property was, I was also impressed to find handicapped-accessible trails leading to the lower falls already in place.

It will take a few years to carry out all of the plans Madison County has for the waterfalls, home, and barn located on the property. In speaking with the tourism bureau myself though, they seem as excited as the rest of us in watching the transformation take place.

This 137’ waterfall is partially hidden in the woods, even though you can easily hear the cascading water from the pathways above. The trails are easy to find, some with stairs leading down to the falls, while other paths, covered in pine needles, bring one to the curved railings that overlook the stunning scenery.

In 1796, a sawmill built by Manoah Pratt Sr. and Abraham Smith operated here. One of the original saws remains on display near the start of the trails. In 1798 the two men built a flour mill on the rocks overlooking the falls and the two mills were considered to be the first mills erected in the area.

The day I explored the park was beautiful, even though it was hard to see through the trees. During the Fall and Winter months, when the view is less obstructed, it’s got to be amazing!

At the end of the day, spending time out in nature is good for us. Mentally, physically and spiritually, I believe it’s just what the Dr. ordered.

This website uses cookies to improve your experience while you navigate through the website. Out of these, the cookies that are categorized as necessary are stored on your browser as they are essential for the working of basic functionalities of the website. We also use third-party cookies that help us analyze and understand how you use this website. These cookies will be stored in your browser only with your consent. You also have the option to opt-out of these cookies. But opting out of some of these cookies may affect your browsing experience.
Necessary Always Enabled
Necessary cookies are absolutely essential for the website to function properly. These cookies ensure basic functionalities and security features of the website, anonymously.
Functional
Functional cookies help to perform certain functionalities like sharing the content of the website on social media platforms, collect feedbacks, and other third-party features.
Performance
Performance cookies are used to understand and analyze the key performance indexes of the website which helps in delivering a better user experience for the visitors.
Analytics
Analytical cookies are used to understand how visitors interact with the website. These cookies help provide information on metrics the number of visitors, bounce rate, traffic source, etc.
Advertisement
Advertisement cookies are used to provide visitors with relevant ads and marketing campaigns. These cookies track visitors across websites and collect information to provide customized ads.
Others
Other uncategorized cookies are those that are being analyzed and have not been classified into a category as yet.
SAVE & ACCEPT
330 shares